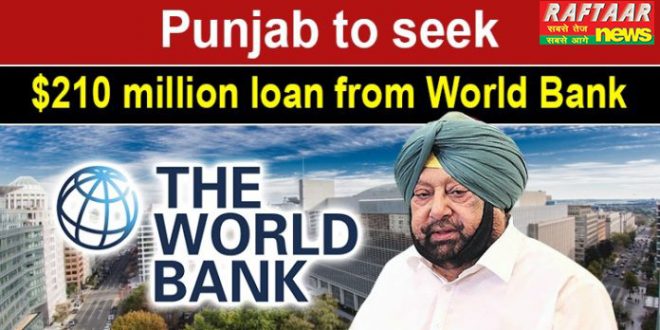 The Punjab government will seek US$ 210 million loan from World Bank/ Asian Infrastructure Investment Bank (AIIB) for the canal based water supply project for Amritsar and Ludhiana under the Punjab Municipal Service Improvement Project (PMSIP).

The decision to seek such loan was taken on Friday by the state cabinet at a virtual meeting chaired by Chief Minister Captain Amarinder Singh. The cabinet authorised the Chief Minister to take any decision to meet the objectives of the project and to ensure successful & timely implementation of various activities proposed by the World Bank/AIIB.

The proposed project investment is expected to cost around US$ 300 million, of which International Bank for Reconstruction and Development (IBRD) will finance 70 percent and Punjab government 30 percent.

The Cabinet was informed that the present water supply system to the residents of Ludhiana and Amritsar towns is through deep bore tubewells installed at different sites. However, with the passage of time, the ground water level is depleting causing the tubewells to need frequent replacement. Also, the discharge in the tubewells gets reduced, as a result of which residents often complain of getting insufficient water for drinking purpose.

To overcome this problem, it has now been decided to shift to canal based water supply in these two towns with the assistance of World Bank/AIIB by seeking a loan of US$M 210. The work for canal based water supply for Amritsar town has already been awarded, whereas request for proposal for Ludhiana town is being floated. The implementation period for this project shall be three years after award of work.

It may be recalled that the State Government, in June 2018, through the Department of Economic Affairs (DEA), GoI, requested the World Bank to support Punjab in implementing 24X7 canal based water supply projects in Amritsar and Ludhiana. With Technical Assistance (TA) from the World Bank, the pre-feasibility reports were prepared for both cities in 2015 and updated in 2019, which proposed the need to migrate from rapidly depleting and contaminated decentralised ground water sources to a centralised treated surface water source.