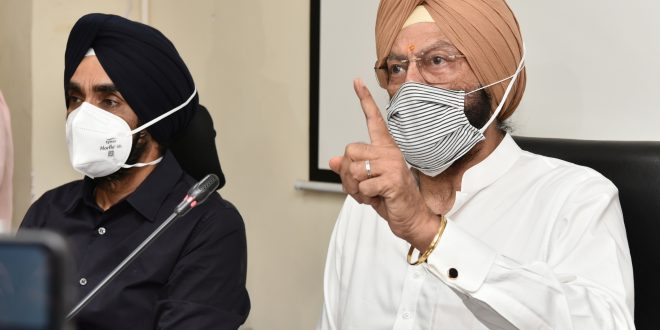 Exhorting the Olympic-bound Punjab athletes to make the state and country proud with their performance, Sports Minister Rana Gurmit Singh Sodhi, on Friday, said he was confident that our players would bring back home the biggest medal haul from Tokyo.

Interacting with Punjab players from here virtually, Rana Sodhi himself an international shooter also handed over Rs.5 Lakh for each Tokyo bound athlete to procure required logistics besides give finishing touches to their preparation ahead of the all important Games, which amounts Rs.1.30 crore.

Pronouncing monetary assistance for every participant, Rana Sodhi said that the Indian contingent for the upcoming Tokyo Olympics is expected to be around 190 with 100 athletes having qualified for the Mega event so far from throughout the country, including 56 men and 44 women. ”We are expecting another 25 to 35 athletes to make a cut for the games, which will be thrilled the audience from July 23 onwards”, he added.

Reiterating the promises being made by Punjab Government, Rana Sodhi said that gold winners at the Olympics would get Rs.2.25 crore as prize money, Silver winners Rs.1.5 crore, while those bagging Bronze would be richer by Rs.1 crore along with government jobs. ”We are expecting maximum podium finishes from Punjab with Hockey as the leading contender because the half of National hockey squad is expected to feature players from the State,” he said claiming that the new sports policy has proved extremely beneficial for budding players to ensure every facility ranging from the expert coaching staff from abroad besides state of the art equipment.

Requesting Union Government to ensure all Indian athletes are fully vaccinated before heading towards Tokyo, the Cabinet Minister said that Olympics is the platform where the best in the world compete. “I hope our athletes would put their best foot forward and make the country proud by winning medals”, said the Minister adding the sports department has provided all kinds of support-financial and logistical-to the athletes despite the challenges posed by the Covid-19 pandemic.

Earlier, Sports Minister Rana Sodhi also handed over appointment letter for the job of Karate Coach to Hardeep Kaur, a 23-year-old international karate player from district Mansa, who as per media reports was forced to work as a labourer to transplant paddy at her native village Gurne Kalan. Rana Sodhi said Hardeep Kaur, who has won several medals in various karate championships at international and national games, was promised a government job two years ago. But, since the corona pandemic was devastating lives and all were forced to shut in homes and she could not complete her documentation with the department thus her appointment has been delayed. Sports Minister exhorted her for preparing world level games and assured all possible help in future.