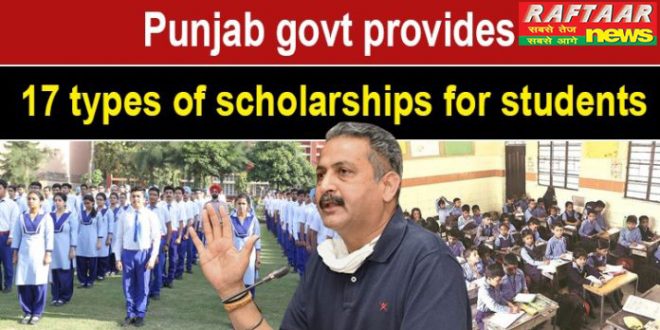 To ensure the education for the children and to encourage them for the study, the government is currently providing seventeen types of scholarships to the school students.

Disclosing this here today , a spokesperson of the Punjab School Education Department said that IX and X class students are being given  an annual stipend of Rs. 3000 per student under the Pre-Matric Scholarship Scheme for SC students. This scholarship is being given to students whose parents’s annual income is less than Rs. 2.50 lakh. Similarly, students of 1st to 10th classes are being awarded an annual stipend of Rs. 1500 under the Pre-Matric Scholarship Scheme for OBC students. The annual income limit of the parents has been fixed at Rs 2.50 lakh.

The students from class I to X are being given an annual stipend of Rs. 1850 under the Unclean Occupation Scholarship Scheme. There is no income limit and this scholarship is being provided to students whose parents work in tanners, flayers and waste pickers ect. Similarly, scholarships are also being offered to sports students studying from 6th to 12th under SC sports students scholarship. Students of 6th to 8th class are being given Rs.500, 9th to 10th Rs.750 and 11th and 12th Rs.1000 at once. Three boys and three girls are eligible for this scholarships, who get first three positions at the block level.

Under the Post-Matric Scholarship Scheme for Scheduled Castes, children who’s parents’s income is less than Rs. 2.50 lakh are eligible for maintenance allowance of Rs. 2500 per annum and hostellers are eligible for Rs. 4000 per annum. The student should have 75% attendance and should have at least 50% marks. Similarly other backward classes are given maintenance allowance of Rs. 160 per month under Post-Matric Scholarship Scheme for OBC students. The income limit of parents has been kept at Rs. 1.50 lakh per annum and student attendance should be 75% and marks should be 60% or higher.