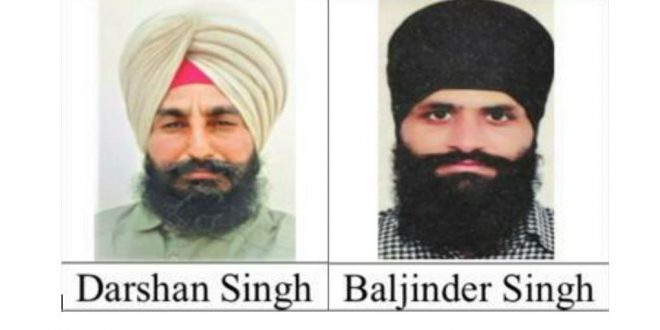 Chandigarh, May 29 (Raftaar News Bureau) : Punjab Police has arrested two of the main accused in the sensational killing of CIA Assistant Sub Inspectors (ASIs), Bhagwan Singh and Dalwinderjit Singh, who were gunned down in cold blood in Jagraon Grain Market on May 15.

The suspects, Baljinder Singh @ Babbi, a resident of Mahla Khurd village, Moga, and Darshan Singh, a resident of Sahauli village in Ludhiana District, who were carrying rewards of Rs two lakhs each on their heads,  are associates of gangster and drug smuggler, Jaipal Bhullar, and they were nabbed from Dabra in Gwalior (MP) on Friday evening. Another associate of theirs, Harcharan Singh, who had allegedly given shelter to them, was also arrested.

Giving details of the investigations, DGP Dinkar Gupta said preliminary questioning of the suspects has revealed that on the fateful day while Baljinder had come to Jagraon Grain Market in his Canter vehicle for providing safe transportation to Jaipal and Jassi to a hideout outside the state, Darshan had met them there with some clothes for the gangster and his associate. Gupta said the two CIA ASIs, who were on duty, got suspicious after seeing some drugs in the Canter vehicle and they confronted the driver.

An apparently cornered Darshan opened fire at the ASIs from his 0.32 revolver and later fled the scene, along with  Jaipal and Jassi, in their I-10 Hyundai car. Babbi, who fled in the spot in the Canter vehcile, joined the others after some distance and they all fled towards Haryana and Rajasthan.

Gupta said during investigations, intelligence inputs were received that the suspects could be in hiding in and around Gwalior, Madhya Pradesh. A team from the Organised Crime Control Unit (OCCU), led by Inspector Pushpinder Singh, was immediately despatched to Madhya Pradesh for further investigations. He said after painstaking investigations for a few days, the OCCU team managed to track the suspects and arrested them from a platform at Dabra Railway station near Gwalior last evening. The suspects were planning to board a train to Maharashtra, Gupta said.

Gupta said the arrested duo has a criminal past and both of them had been convicted in two different murder cases earlier. In fact they had come in contact with each other while undergoing their conviction in jail. While Darshan was granted remission while undergoing his sentence, Baljinder Singh had been released on bail by the High court after his conviction by the Sessions court, Moga. Darshan reportedly has two more criminal cases registered against him and was recently also involved in smuggling of opium.

The DGP said Jaipal Bhullar is one of the few gangsters who has managed to elude arrest so far. While he remains at large, his close associate, Gavi, was arrested by Punjab Police from Jamshedpur last month. Gavi was wanted in the case of recovery  of 11 kg heroin in Jalandhar district.

Both Jaipal and Gavi have close links with drug smugglers based in Pakistan and Jammu. Another associate of theirs, Jaspreet@ Jassi, who is also absconding after the Jagraon shootout, was earlier  arrested in a case of smuggling of heroin in Mohali and is also wanted in a case of kidnapping.

Gupta said a massive manhunt is still on for the absconding suspects and he was confident that they too would be arrested soon. He reiterated that the supreme sacrifice of the two brave hearts ASIs will not go in vain and the force was committed to get all the accused. He said rewards of Rs 10 lakhs and Rs five lakhs have been announced for the arrest of Jaipal Bhullar and Jaspreet @ Jassi Baba, respectively.