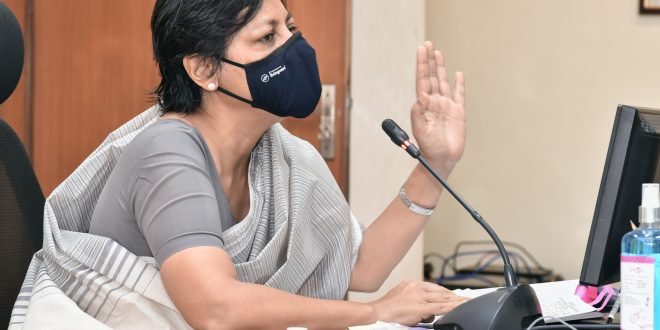 Acting swiftly on Chief Minister Captain Amarinder Singh’s directions to launch a special campaign against Covid in the villages, the Chief Secretary, Ms Vini Mahajan, on Sunday, exhorted the rural population in Punjab to voluntarily come forward and get themselves tested and vaccinated against the deadly virus.

Expressing concern over the recent trend showing a spike in daily cases and deaths due to Covid in the hinterland, she said even as the official machinery along with the teams of various departments have been working diligently to create awareness among the ruralites, it was observed that most of the villagers report only when their condition deteriorates.

The Chief Secretary said if the patient with initial symptoms of Covid such as cough, cold or mild fever timely reports to the nearest hospital then the virus can be cured without any major complications.

Chairing a high-level meeting to review the current Covid situation, its management and vaccination, here, the Chief Secretary said with the concerted efforts of the Punjab Government, another consignment of vaccines was expected to reach the state soon, which will help in further accelerating the pace of the ongoing vaccination drive in the state. She said Punjab would get 1.14 lakh additional doses of Covaxin by May 31.

Even as the state was getting less supply of vaccines than the demand, the Chief Secretary instructed the district officers to vaccinate the vulnerable/ eligible persons timely. She also directed the district authorities to check the reported overcrowding at the vaccination sites. The Chief Secretary also asked the officials to identify the unregistered construction workers and explore the possibility of vaccinating them.

The Chief Secretary informed the industry leaders that if they want to vaccinate their employees, they can contact the authorised officers of the concerned districts.

She informed that industries will be given Covaxin at the cost of Rs 430 per dose and the officials must encourage the industries to order government approved vaccines at their own level. She said the private hospitals should also be encouraged to provide vaccination at the reasonable rates.

The Chief Secretary also asked all the government employees and officials to get themselves vaccinated.

Ms Mahajan said by importing oxygen tankers from different parts of the country and abroad, the Punjab Government has accelerated the supply chain to fill the gap between the demand and supply of the life-saving gas. A dedicated oxygen control room was functioning 24×7 at the state level to supervise the demand, supply and distribution of the oxygen.

She informed that 44 pressure swing adsorption (PSA) plants were also being set up in different parts of the state at the cost of Rs 4.71 crore. Besides, distribution of oxygen concentrators was also being made to the districts as per the requirement. She said the number of oxygen concentrators would soon increase with several social service organisations and reputed companies coming forward to provide the same.

She directed the district authorities that if any district has any non-functioning medical equipment, especially oxygen concentrators, it should immediately be sent to the state headquarters so that it could be repaired by the experts and put back to use.

The Chief Secretary said a large number of Covid Fateh health kits would arrive in the next few days and the kits would be distributed to the needy through the district authorities.

She said instructions have already been issued to the PSPCL to ensure uninterrupted power supply to the hospitals treating Covid patients.

She said the state’s health infrastructure was fully robust and was capable of dealing with the present situation.

During the meeting, Punjab Director General of Police (DGP), Mr Dinkar Gupta, informed that special steps were being taken by the state police to spread awareness about Covid in the villages. He said the villagers were being encouraged to get tested and vaccinated with the help of rural policing teams.

He said free food was being delivered to the needy Covid patients and a large number of people were calling the police helpline themselves for seeking help, which was rendered within the minimum possible time. He said the helpline has received 160 calls in the last few days and all of them were provided free food by the local police.

The DGP said some strict measures have been taken by the police to curb the spread of Covid but instructions have also been issued at the grassroots level not to harass the people unnecessarily and to ensure compliance of the government’s directives and orders.

The Chief Secretary appreciated the work being done by all the officers in this difficult period and urged them to continue working with enthusiasm and diligence till the situation returns to normal.