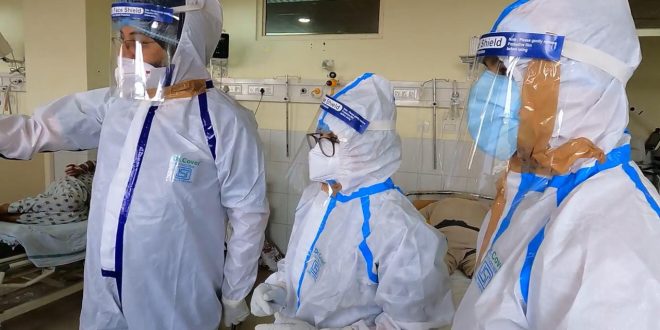 In order to quell the malicious propaganda on social media pertaining to Rajindra Hospital Patiala, the Deputy Commissioner Patiala Mr Kumar Amit today conducted a surprise visit in the Covid ward of the premier hospital.

Wearing a PPE kit, the Deputy Commissioner, accompanied by other officers, inspected the arrangements at Covid ward and interacted with the patients. The Deputy Commissioner said that this apex institute was serving the humanity in right earnest by ensuring quality treatment to Covid patients in this hour of crisis. He said that it was a matter of immense pride and satisfaction that the entire team of Doctors, para medical staff, sanitary workers and others were serving the humanity zealously.

The Deputy Commissioner said that this premier institute was not only serving the people of Patiala but the entire Malwa region and other states too. He said that the marvellous service rendered by dedicated team of Rajindra hospital would be scripted in golden words in annals of history. Mr Kumar Amit said that the malicious propaganda against this apex institute in section of social media was irrational, far away from reality and totally unwarranted.

Meanwhile, during the surprise inspection Doctors, nurses and ward attendents were found performing their duty diligently and patients were being regularly cared for. Similarly, Cleanliness at the ward was up to the mark and extra effort on ensuring cleanliness in ICU floor was visible. During the checking of washrooms too the cleanliness was found satisfactory and attendants were on standby.

However it was observed that due to heavy patient load the washrooms do need regular cleaning of the washrooms for which attendants were already on duty. As a lot of patients remove their masks while talking to their relatives and consequently desaturate, regular counselling was being done by the hospital staff to avoid that. Similarly, Food and bevereges were also being supplied to the patients regularly for which a viable mechanism has already been put in place. The officers also checked the control room where consultants and doctors regularly trying to update patients’ relatives about the situation of their near ones. The officers asked them to further adopt a humane approach towards dealing with kins of patients in this hour of crisis.