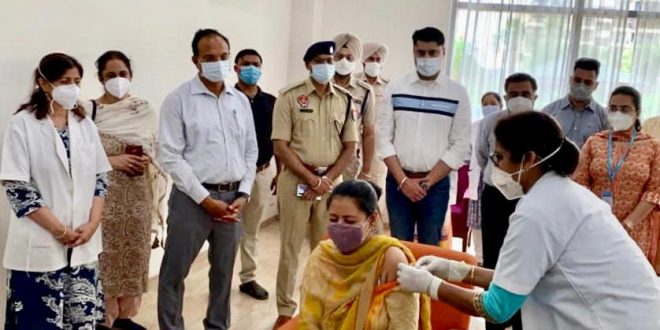 Kick starting the campaign Mr. Bindra said that inoculation drive is the only way to fight and overcome this virus at the earliest.

Accompanied Joint Commissioner of Police J Elanchezhian, Civil Surgeon Dr. Kiran Ahluwalia Gill, he said that the construction workers have been included into high-risk category and would be give jab as priority group.

Mr. Bindra said that the vaccine will give them shield against the contagion and even if they contract the infection due to their greater interaction job, it would be mild.

PYDB Chairman said that the board has already organised 33 vaccination camps in the state and appealed the youth to get themselves vaccinated in the interest of society.

All the dignitaries have made an appeal to the people to join hands with the administration to contain the pandemic as soon as possible by receiving the vaccine in large numbers in nearby government/private health institutions.

It is pertinent to mention that Ludhiana has 25000 registered construction workers and would be covered aggressively.