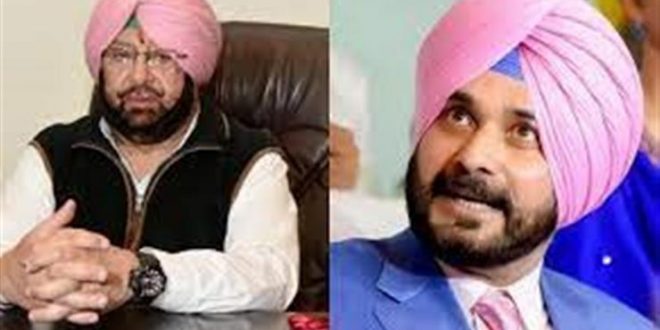 Taking strong exception to the no-holds-barred attack unleashed by Navjot Sidhu against Chief Minister Captain Amarinder Singh, several Punjab cabinet ministers on Monday urged the Congress high command to take strict disciplinary action against the dissident MLA.Terming Sidhu’s unmitigated onslaught on the Chief Minister as an act of gross indiscipline and an attempt to undermine the Congress government in the state, the ministers said the MLA’s personal attack on Captain Amarinder was an anti-party act, which called for immediate disciplinary action.The cabinet ministers, including, Brahm Mohindra, Sunder Sham Arora and Sadhu Singh Dharamsot, came out in strong criticism of Sidhu’s actions and open criticism of the Congress Chief Minister while being an elected MLA from the same party.Sidhu’s recent spate of comments against the Chief Minister could no longer be dismissed as the rantings of a disgruntled member of a democratic political party, said the ministers, adding that the open rebellion was damaging the interests of the Congress at a time when Assembly elections in the state were less than a year away.Failure to take action against Sidhu now could trigger unrest in the party’s state unit, which would be fatal for the party, which had suffered major electoral blows in the recently concluded Assembly polls in five states, the ministers warned.The ministers said it was more than evident now that Sidhu’s intentions were nefarious and motivated by his vested personal and political interests. It was clear that the incalcitrant MLA, through his blatant accusations and allegations, was trying to fan dissent in the Punjab Congress against Captain Amarinder, who had successfully steered the party to an unprecedented win in 2017 and in every major election in the state thereafter, they added.Dubbing Sidhu’s aggressive posturing  on the social media as an attempt by the disgruntled MLA to pressurise the high command into succumbing to his unreasonable demands, the ministers said unless urgent steps were taken by the party to check his unbridled tirade, it would encourage other ambitious and rebellious members to raise their voice openly against the Congress leadership while continuing to enjoy its patronage.Pointing out that the Chief Minister had made several overtures in recent past to resolve any perceived differences on Sidhu’s part, the ministers said it was clear that the latter did not want to be placated but only wanted to score political brownie points to further his personal ambitions.They appealed to the party’s central leadership to nip this insurgence in the bud so that the Congress does not lose out on the electoral advantage it has in Punjab and ends up losing a winning battle