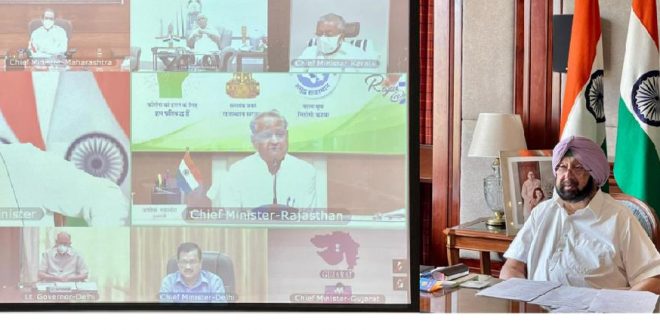 While his government has adopted all measures to minimize demand for oxygen, given the criticality of it as the most essential drug for treatment of serious Covid patients, the Government of India must ensure that all commitments as per the allocation are complied with by liquid oxygen manufacturers in other States, he demanded, adding that “this is not happening at present. Punjab’s supplies come from Haryana, Himachal Pradesh and Uttarakhand, and there are reports of supplies being ‘hijacked’, he said at Prime Minister Narendra Modi’s virtual conference to discuss the Covid situation with chief ministers of the worst hit states.

On the vaccination front, the Chief Minister said at the rates declared by one manufacturer, the cost to the Punjab government will be over Rs 1000 crore. He sought central government funding for vaccination, with permission to make the cost a fit charge on SDRF funds in the interim.

Regular vaccine supply must be ensured to maintain the supply chain to the last vaccination booth, he further said, adding that due to supply shortage, the vaccination in last one week has been slightly low, i.e. around 75-80,000 daily. While Punjab received fresh supplies yesterday the current stocks can last only 3 days as demand for vaccine is increasing, he stressed.

Captain Amarinder also expressed concern over lack of clarity on the quantity of vaccine to be made available by Centre after May 1, and how the manufacturers will regulate supplies to different States and private purchasers. The state government, on its part, has constituted an Expert Group under virologist Dr. Gagandeep Kang to advise on our vaccination strategy for 18-45 years, which States have been allowed to vaccinate at their cost, he disclosed.

The Chief Minister also pointed to the shortage and blackmarketing of medicines like Remdesivir and Toci, which he said was creating great panic in the media and general public. Though the Central Government was making efforts to increase their supply, a clearer messaging was required to inform the public that they are not magic wands, and also about available substitutes, he stressed. Pointing to the shortage of anti-viral Remdesivir Injections and zero availability of Toci injections in the state, he said hospitals were, however, following treatment protocol for critical patients and using alternate medicines.

Citing the increase in the number of cases to around 5000 per day, with 10% positivity in the last one week, from around 3000/day with 8% positivity during the last VC on April 8, the Chief Minister urged the Prime Minister to direct central institutions like AIIMS Bathinda, PGI Satellite Centres and Military Hospitals in Punjab to provide additional Covid beds. Pre-fab structures on offer by CSIR could be used for this purpose, he said, pointing to the grave situation in the state, with a case fatality rate of 1.4%.

Expressing concern over the fact that Punjab had not received any fresh results on viral genome sequency in the last almost a month, when the last results showed over 85% UK strain, Captain Amarinder urged the Prime Minister to order escalation of efforts to understand the mutations, and their implications for proper policy response.  He also urged the Government of India to build a consensus on Covid appropriate behaviour to check the spread of the virus.

Assuring the Prime Minister of all-out efforts by his government to combat the Covid spread, the Chief Minister said his government had launched a series of containment measures with stringent enforcement. He listed some of the measures in place in the state, and added that micro containment zones are being increased with special monitoring teams.

Treatment of Covid patients had been scaled up, and all hospitals had been asked to reserve 75% beds for Covid and to postpone all elective surgeries till May 15. Bed occupancy is 29-30% in Level-2 and 42% in Level-3, he said, adding that the state was getting patients from Himachal Pradesh, Jammu, Haryana and Delhi – possibly relatives of local persons.