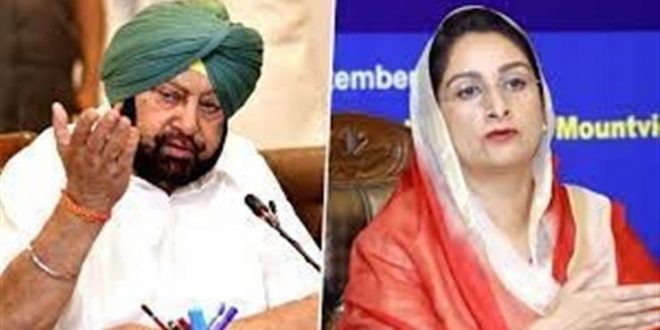 Expressing shock at Harsimrat Kaur Badal’s pathetic and insensitive attempts to make political hay from the current Covid crisis in the state, Punjab Chief Minister Captain Amarinder Singh on Tuesday said the Akali leader’s habit of lying, even on the most sensitive of subjects, was shameful, especially at a time when the unrelenting efforts of the state’s healthcare workers were showing some positive results.

“While all Punjabis know what a congenital liar she is, her comments on the Covid situation have exposed a new low,” said the Chief Minister, slamming the former Union Minister for playing dirty political games on the issue of the pandemic.

Instead of choosing to support his government’s concerted efforts, which had led to some bright spots on the Covid front, Harsimrat, along with the rest of her party colleagues, including SAD president Sukhbir Badal, had been continuously indulging in cheap criticism of his government on the management of the pandemic, he remarked.

Pointing out that the state’s medical community was working day and night to fight the pandemic, which had not spared any state or country, Captain Amarinder noted that the untiring efforts of the medical fraternity had led to some improvement in the situation over the past few days, with Punjab no longer among the top five states contributing the maximum case load. As per official data released by the Central government yesterday, 10 states had shown a step rise in the daily new Covid-19 cases accounting for 80.92 per cent of the new infections reported in a span of 24 hours. Punjab was not in the list, and has maintained that even today, according to the Centre’s data, observed the Chief Minister, adding that this was marked improvement over the situation in the state till a few days back.

While Punjab was still a long way from victory in the battle against Covid, this was a matter of optimism, and a cause for appreciation of all the frontline workers who were working hard for the past over one year, he noted. “But far from appreciating the hard work, dedication and sacrifice of all these workers, all that Harsimrat is worried about is how to take political mileage from the calamity, which has struck her own state and people,” said the Chief Minister, lambasting the SAD leader over her attempts to undermine the efforts of all these people.

“Does she not realise how such statements are demotivating for the frontline workers, and all the people of Punjab? Or does she simply not care, because her entire focus is on finding excuses to pull down my government?” asked Captain Amarinder.

The fact was that the entire nation, in fact the world, was suffering the effects of the pandemic, with Punjab no exception. Some states did better at some time, while others showed improvement at others, he pointed out, adding that Harsimrat had conveniently chosen to ignore the hard facts in favour of frivolous allegations and petty blame-games.

The Chief Minister pointed out that his government had never sought to undermine the dangers of the pandemic, nor its devastating effects on Punjab, particularly in terms of fatality. But even in the deaths of so many fellow Punjabis, all Harsimrat can see is an opportunity to make political mince-meat, he added. Vaccine hesitancy was also something his government was fully cognizant of, and had openly been speaking about, but Harsimrat seemed to have forgotten that bulk of the problem is the anger among the people against the BJP-led central government, of which she herself was a part till not long ago, over the Farm Laws, he added. “Had you (Harsimrat) not been party to the draconian laws, and put Punjab’s interests before your own, we would have seen more people taking vaccine shots, openly and fearlessly, in the state,” he added.

The Chief Minister also lashed out at Harsimrat for finding fault with the ban on political gatherings in the state. While the Congress had voluntarily decided to put off all rallies and gatherings, the Akalis, led by Sukhbir himself, were spreading mayhem by proudly holding such rallies without masks and social distancing of any kind, he pointed out, slamming Harsimrat for defending her party’s irresponsible actions. Had SAD and AAP not continued to behave with such recklessness after Punjab was gripped by the second wave, he would not have been forced to impose a blanket ban on political gatherings, he added.