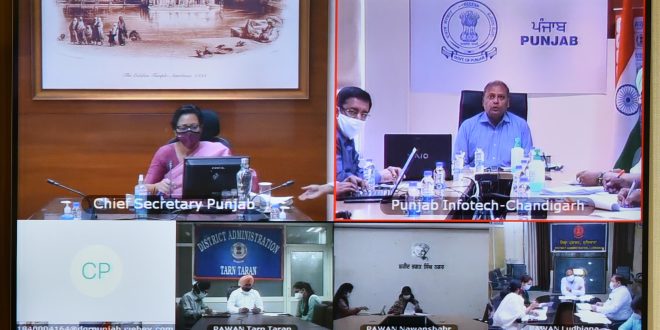 Even as the state’s telecom infrastructure density was already almost double than the national average, the Punjab Government has decided to increase it further to ensure fast track growth of digital communication network and provide affordable and universal access of broadband for all in the border state.

Presently, Punjab’s telecom infrastructure density was 0.7 per 1,000 population as compared to 0.42 per 1,000 national average and the state ranks third in the country.

She also asked the Housing and Urban Development and Science, Technology and Environment Departments to adopt the State Telecom Policy aimed at increasing the telecom density to bridge the digital divide in the border state.

Underscoring the importance of further strengthening telecom infrastructure in the state, the Chief Secretary said Punjab was one of the few states where tele-density was already very high. Punjab was third among all circles in the country with 125 per cent tele-density, only behind Himachal Pradesh and Kerala. In order to further improve the quality and better data speed, the infrastructure was required to be strengthened further.

Chairing a virtual meeting of the State Broadband Committee at her office, here, Ms Mahajan stressed that the internet connectivity was must to propel the state economy and bridge the digital divide.

“With the further strengthening of infrastructure, the quality of telecom services for mobile and internet users will improve significantly and will also prove a benchmark step to provide broadband access to all the villages in the state,” she asserted.

While lending ear to the problems being faced by the telecom/ infrastructure service providers, the Chief Secretary directed the departments concerned and all the Deputy Commissioners to clear all the pending applications received on Punjab Business First Portal for installation of telecom infrastructure in a stipulated time frame.

She also emphasised the need to increase the percentage of infrastructure connected with fibre networks in the state.

Senior DDG Punjab LSA, DoT, Naresh Sharma, informed the meeting that as per the Government of India’s target set under the National Broadband Mission, the infrastructure density was to be increased from present 0.42 per 1,000 population to 1 per 1,000 population by setting up of additional infrastructure. Currently, around 20,800 installations were functioning and their density was around 0.7 per 1,000 population which was to be increased to 1 by 2024 for which approximately 9,000 more installations will have to be set up in Punjab. Presently, approximately 1,000 to 1,200 installations were being set up every year, of which around 32.22 per cent were fiberised in Punjab, he added.

The Chief Secretary also asked the state agencies — Water Supply and Sanitation, Local Government and Rural Development and Panchayats departments — to intimate the BBNL before starting works on rural routes so that the BBNL routes were not affected.