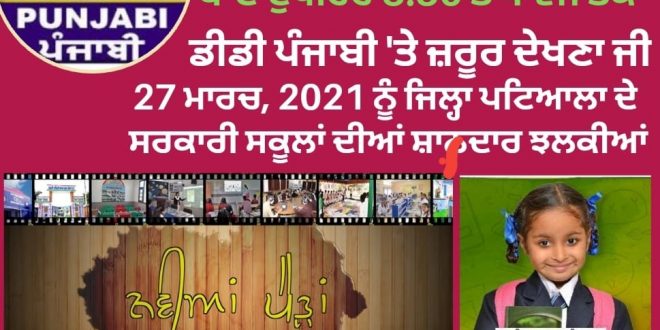 ‘Navian Pairhaan’ program regarding government schools on DD from March 27

Under the guidance of Punjab Education Minister Mr. Vijay Inder Singla and under the supervision of Education Secretary Mr. Krishan Kumar, the changed face of government schools will now be spotted on the Doordarshan. The program is being aired on DD Punjabi from March 27 to convey the message of achievements and changes in the infrastructure of government schools. The program will be telecasted every Saturday and Sunday from 3.30 pm to 4.00 pm under title ‘ Navian Pairhaan’. It will provide district wise information about the attractive infrastructure of government schools, modern teaching techniques, achievements of students and facilities being provided to students by the government.

According to a spokesperson, continuous efforts are being made to spread  the information of rejuvenation of schools to the public. While the officials and teachers of the education department are personally visiting door to door and other common places to extend the message of state-of-the-art infrastructure of government schools. The department is also making efforts  to aware society through social and print media. The 15 %  increase in enrollment in government schools last year is a result of the transformation of the school structure.

Attractive gates and walls of schools have been constructed under the Smart School Campaign. At the same time school buildings and classrooms have been decorated. In addition smart classrooms are developed with projectors, LCDs and Edusat have been provided. The ‘Navian Pairhaan’ program of DD Punjabi will update the people of the state about the new face of government schools besides playing an important role to motive them to enroll their kids in government schools.

Previous Farmers’ organizations put a complete blockade on the twin roads of Patiala during the call for India Bandh
Next PUNJAB CM SANCTIONS RS.1.25 CR FOR DEVELOPMENT OF NATIVE VILLAGES OF 5 GALWAN MARTYRS