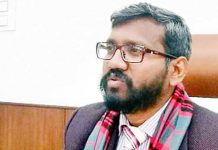 In view of ensuing assembly election in the state of Punjab early next year, the office of Chief Electoral Officer Punjab has embarked upon a drive for continuous updation of voter list.

As per existing policy of Election Commission of India (ECI), revision of electoral rolls with reference to 1st January of the coming year as the qualifying date is done in the later part of each year in all States/UTs (normally in the last quarter of a year) so that final publication of the electoral rolls could be made in the first week of January of the succeeding year. However, since assembly elections are going to be held in the state of Punjab the early next year, the thrust is on carrying out updation on a continuous basis.

Under Systematic Voters Education and Electoral Participation (SVEEP), a comprehensive campaign is being chalked out utilizing outreach programme, mass-media and social media to make people aware of the campaign.

Dr S.Karuna Raju, IAS, CEO, Punjab said that an accurate and error-free voter list is the most important pre-requisite for a free and fair election. He appealed to voters of Punjab and the election officials to ensure 100% registration of the eligible citizens.”

Talking about the campaign, Ms. Madhvi Kataria, IAS, Additional CEO, Punjab said, “Special campaigns are planned to ensure 100% registration of eligible voters, besides taking appropriate steps for improving the health of voter list. Keeping the pandemic situation in view, a massive awareness campaign is being carried out with a thrust on technology and focusing on digital media.”

Social media is effectively and seamlessly used to disseminate information to the target audience especially the youth. In addition, the Social media platforms are highly effective in matter of grievance redressal. If any grievance is found through social media, the matter is immediately escalated in the WhatsApp groups of Electoral Registration Officers (EROs) and Election Tehsildars and the concerned officer are directed to redress the grievance.

Citizens can fill form to avail services like registration, correction or deletion of name in the voter list by filling up form at DC office, the office of Electoral Registration Officers or contacting the concerned Booth Level officer (BLO).