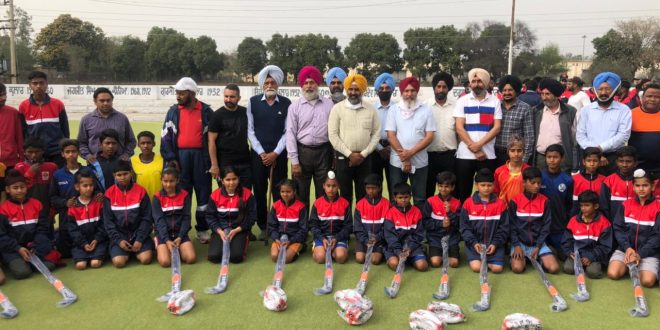 MLA Pargat Singh kick-starts construction and up-gradation of sportspark and stadium Dhina and Sansarpur at an outlay of Rs. 62 lakh

While inaugurating the construction of sports-park in Dhina, and up-gradation of stadium in Sansarpur village, the MLA said that a total of Rs. 62 lakh would be incurred by the Punjab government on these projects, which would be completed within next two months. He further added that the sports-park in village Dhina would come up at Rs. 51 lakh with facilities like athletic track, sprinkle system, boundary wall, rest rooms, washroom, and drinking water while existing sports infrastructure in Sansarpur stadium would be upgraded at a cost of Rs. 11 lakh.

Meanwhile, MLA Pargat Singh distributed sports kits amounting Rs. 2.75 lakh to over 150 budding players of hockey and football games that includes sports kits to 100 football and 50 hockey players in both villages. He also reiterated his commitment to providing all necessary help to budding players and assured more kits would be distributed among players whenever required. Mr. Singh said there was no paucity of funds to elevate and upgrade sports infrastructure in the constituency as Punjab government was making all out efforts to promote sports in the state.

During a formal interaction with the players, The MLA called upon youths to channelize their energy towards the sports and scale new heights in their career. The MLA further pointed out that the need of the hour was to popularize sports culture amongst the children as well as the youths. He asked the budding players to lay due focus on study along with the Sports for comprehensive development of their personality. He said that more sports kits would be distributed among budding players to help them practice smoothly.

Thanking the MLA Pargat Singh for his contribution towards sports, both the village Panchayats said the Jalandhar Cantt Constituency has witnessed prodigious increase in its sports infrastructure in last few years adding the construction of these new stadiums would further push constituency into a high growth trajectory enabling it to realize its dream of being a sports hub in the district.