Home / Breaking News / PUNJAB POLICE BUST INTER-STATE SEX RACKET IN LUDHIANA, 14 PERSONS INCLUDING 10 GIRLS ARRESTED ALONGWITH LADY KINGPIN USED TO IDENTIFY AND FORCE NEEDY YOUNG GIRLS IN WANT OF WORK DURING COVID INTO PROSTITUTION ALSO RECOVERS RESTRICTED DRUGS, LIQUOR, CASH, MOBILES FROM THE HOUSE WHERE BROTHEL WAS BEING RUN BY ITS LADY OWNER OUT ON BAIL IN SIMILAR CASE 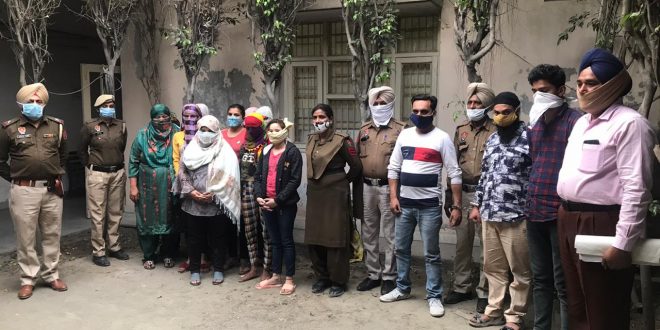 PUNJAB POLICE BUST INTER-STATE SEX RACKET IN LUDHIANA, 14 PERSONS INCLUDING 10 GIRLS ARRESTED ALONGWITH LADY KINGPIN USED TO IDENTIFY AND FORCE NEEDY YOUNG GIRLS IN WANT OF WORK DURING COVID INTO PROSTITUTION ALSO RECOVERS RESTRICTED DRUGS, LIQUOR, CASH, MOBILES FROM THE HOUSE WHERE BROTHEL WAS BEING RUN BY ITS LADY OWNER OUT ON BAIL IN SIMILAR CASE

In an early morning operation, Punjab Police on Saturday busted an inter-state sex racket active in Ludhiana with arrest of 14 persons including 10 girls alongwith the lady kingpin already on bail in similar case who used to target needy girls out of jobs due to Covid lockdowns from city and outside forcing them into prostitution.

Antecedents of girls found involved in the flesh trade have been traced back to as far as Nepal, Kerala, Himachal Pradesh, Haryana, Uttrakhand, Chandigarh & Amritsar and further investigations are on to unearth the complete area of their operations, ADCP-4 Ludhiana Rupinder Kaur Sran who led the operation. We have also recovered restricted drugs Etizolam and Escitalopram Oxalate tablets which are only allowed on prescription  and the accused are being interrogated to ascertain the source of their supply, the ADCP added.

Initial investigations have also revealed the names of similar operatives in other cities with whom the main accused and her girls were in touch to widen their net, Sran said adding all these angles were being probed and more arrests were likely.

Twenty tablets of Etizolam and Escitalopram Oxalate tablets besides 5 pieces of Spanisshe Fliege sex drops were seized. Seven mobile phones, 28 packets of condoms, besides Rs 3630 and two liquor bottles have also been seized from the spot.

Commissioner of Police Ludhiana Rakesh Agrawal had constituted a special team under ADCP Ludhiana IV Rupinder Kaur Sran, with SHO Mohammad Jamil its member. An FIR No. 46, dated 6-03-2021, u/s 3,4 and 5 of the Immoral Traffic Prevention Act 1956, PS Tibba has been registered in this case.

Giving details about the raid, ADCP Rupinder Kaur Sran said that a tip-off was received about flesh trade activity being run by the accused and her movements were kept under  watch. The main accused has been identified as Manjit Kaur alias Pammi aunty resident of street number 10 New Subhash Nagar and was also arrested in a similar case lodged at Police Station Jodhewal in 2018. Three men were also arrested from the house during the raid who had come there as customers.

She was on bail now and was running the illegal activity from her house only by luring young needy girls into prostitution. Modus operandi was to engage girls once into her net to target more needy girls out of work due to Covid lockdown and force them into prostitution. Of those arrested, one girl from Delhi was lured into the trade because she could not repay the loan she had taken from a relative to make ends meet during Covid, while another girl was picked up by the main accused from a city Gurdwara she was visiting at the pretext of job offer. These girls back home used to tell their family members that they were working in a factory or performing in marriage parties, Sran added.