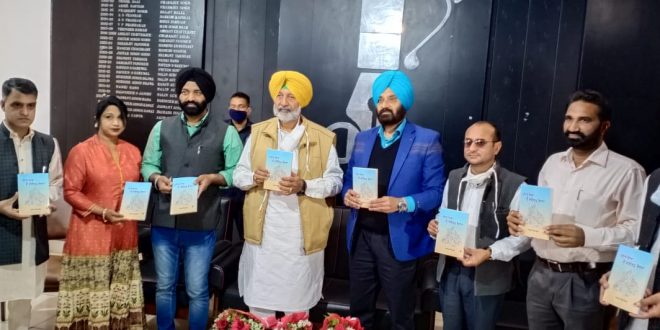 While congratulating the author Jagtar Bhullar on this occasion, Mr. Balbir Singh Sidhu said that in his book “Punjab Siya Mein Chandigarh Boldan”, he has expressed the sentiments and rights of Punjabis about the capital of Punjab in his book.

He said that neglecting Punjabi language in the capital Chandigarh and giving importance to English and Hindi language was also a matter of concern for us for which he assured that the Punjab government under the leadership of Capt. Amarinder Singh would take all necessary and concrete steps.

He said that Chandigarh was established by evacuating 28 villages of Punjab but today the ownership and rights of the state were being continuously reduced which was equal to betraying Punjabi and Punjabiyat. He said that West Punjab was separated in 1947 and Haryana and Himachal Pradesh in 1966 for which some political parties were directly responsible.

He said that he fully understands the important issues raised by senior journalists Tarlochan Singh and others regarding Chandigarh which Jagtar Singh Bhullar has beautifully presented in this book so that the people of Punjab can understand every aspect related to their capital and state. And at the same time our young generation was able to understand in depth their historical facts related to the capital.

Mr. Balbir Singh Sidhu said that Mr. Jagtar Bhullar had written the whole story of displacement of Chandigarh from the villages of Punjab to making it a Union Territory.

Speaking on the occasion, senior journalist S. Tarlochan Singh said that this book highlights the concern of Punjabis towards the capital Chandigarh and the discrimination against mother tounge Punjabi. He said that this book of Jagtar Bhullar like the previous two books would succeed in gaining the full love of the readers.