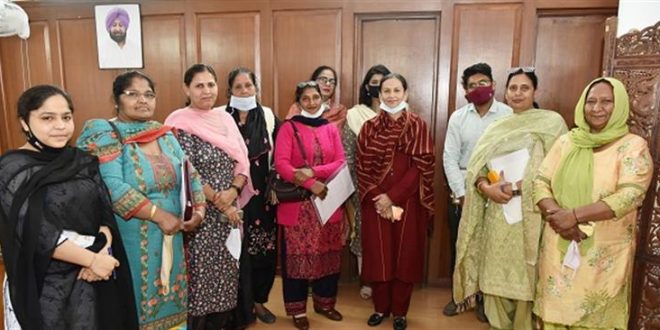 During a meeting with Anganwadi Workers Unions here at her office in Punjab Civil Secretariat, Mrs. Chaudhary directed the officials to fill the vacant posts of Anganwadi Workers and Helpers rapidly. She also apprised that legitimate demands related to other departments would also be raised with due course and resolved amicably. She specifically said that she will take up the matter with the Finance Minister personally to early resolve the demands pertaining to the Finance Department.

Ensuring to take up the matter to enroll 3 to 6 years old children in Anganwadi Centers, she said that this matter would be taken up with the School Education Minister. She also appealed to the union representatives to celebrate women day with passion and vigor. Prominent amongst others who were present in the meeting included; Director-cum-Special Secretary Mr. Vipul Ujwal, Joint Secretary Mrs. Vimmi Bhullar, Deputy Director Mrs. Rupinder Kaur and representatives of Anganwadi workers Unions Mrs.Hargobind Kaur, Mrs. Usha Rani, Mrs. Subhash Rani, Mrs. Shinderpal Kaur and Mrs. Saroj Chhapriwala.