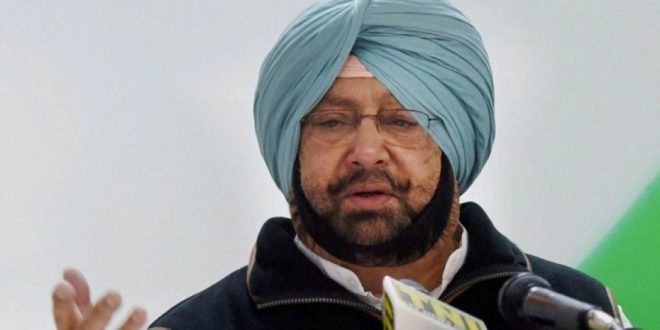 The Chief Minister further reiterated the state’s demand for releasing the GST Compensation on monthly basis in the coming fiscal year, and sought extension in the period of GST Compensation beyond the current 5 years for States like Punjab, which have permanently lost a significant portion of their revenue especially on account of subsuming of Purchase Tax on food grains and are staring at a huge revenue shortfall after the end of compensation period.

In his speech submitted at the Niti Aayog meeting, the Chief Minister said the practice of direct transfer of funds under certain Central Schemes to the implementing agencies by-passing the Consolidated Fund of the State not only violates the provisions of the Constitution but is also against the spirit of Cooperative Federalism. The Government of India is, hence, requested to route all funds pursuant to Central Schemes only through the Consolidated Fund of the State, thereby allowing States to monitor the effective implementation of these projects with greater financial accountability and transparency, he said.

Pointing out that the 15th Finance Commission in the final report for the FY 2021-22 to 2025-26, has recommended certain Sector-specific and State-specific Grants for the State of Punjab, amounting to Rs. 3442 Crore and Rs. 1545 Crore respectively. However,  these have still not been cleared by the Government of India, he regretted, urging the Centre to provide these specific grants to the state creation of necessary infrastructure and provide the much-needed impetus to its economy.

To further enhance the ease of doing business, which has led to Rs 70000 crore fresh investment in Punjab in the last 4 years, the Chief Minister suggested that periodic assessment of reducing compliance burden with Ministries and agencies of Government of India, such as MoEF, NHAI, AAI, may also be done.  He further sought steps to improve logistics/transportation for the land-locked state of Punjab, which is unable to reach its full potential due to distance from the ports in terms of freight movement. He urged the central government to draw up a scheme to facilitate the industrialization in inaccessible areas and States that are more than 1,000 km away from the ports on both western and eastern coastline, by subsidizing the industrial units for transportation of their finished product and procurement of raw material to and from the nearest port.

The Chief Minister also sought incentivization by the GoI for sending cargo directly from Punjab airports (Mohali, Amritsar & Ludhiana [upcoming] International Airports) to both Middle Eastern & CIS countries instead of Delhi Air Cargo Terminal for the major export commodities, including perishable agri-commodities. Further, states like Punjab, which share international border with other countries, may also be allowed to engage in cross-border trade through road, he urged.

Captain Amarinder reiterated his government’s demand for according Special Category Status to Punjab, as it is strategically located along a live international border. Allocation of funds as per Special Category Status should be provided to the State to promote its industries, along with capital subsidy, insurance subsidy and reimbursement of GST to the industries coming up in Border and Kandi districts of the State similar to the Industrial Development Scheme for Himachal Pradesh and Uttarakhand, he added.

On the infrastructure front, the Chief Minister urged the Government of India to get the Ministry of Railways to kickstart, without delay, and put on fast track the strategically important project of construction of new Railway Line from Beas to Qadian. He also urged the Railway Ministry to sanction and take up a special Railway project for a new railway line from Mohali to Rajpura, and to expedite construction of new rail link of 25 km length between Khemkaran-Patti to Ferozepur-Makhu.

The Chief Minister further sought separate allocation for “Efficiency Measures and Innovations” in every central infrastructure scheme, which should be a 100% central grant. He urged the Prime Minister to approve the proposal sent by the State to the Ministry of Jal Shakti on revised sharing pattern of rural water supply schemes in hilly/sub-montane areas of the State at par with the neighbouring districts of Himachal Pradesh.

Taking cognizance of the increased focus on online education amid the Covid pandemic, the Chief Minister urged the GoI to provide liberal funding for states to implement digital infrastructure, online teaching platform/tools etc and addressing of digital divide in a bigger way.