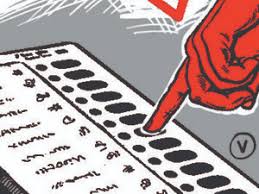 Punjab gears up for General Elections of Municipal Bodies

Chandigarh (Raftaar News Bureau):The voting process of General Elections of 8 Municipal Corporations and 109 Municipal Councils & Municipal Panchayats will be held at 8 am to 4 pm on February 14, 2021. All the arrangements have been put in place by the administration.Official Spokesperson of the Commission apprised that 30 IAS/PCS officers have been deputed as Observers to conduct free and fair elections. Apart from this IG/DIG level officers have also been appointed as Police Observers i.e. IPS Mukhwinder Singh Chinna has been deputed as observer for SAS Nagar, Roopnagar & Fatehgarh Sahib, besides this, Surjit Singh IPS for Amritsar, Tarn Taran, Gurdaspur & Pathankot, Baljit Singh Rathore IPS deputed for Bathinda, Mansa & Faridkot , Surinder Kumar Kalia IPS for Hoshiarpur, Jalandhar, Kapurthala and SBS Nagar.

The Spokesperson added that Harbaz Singh IPS has been selected as observer for Ferozepur, Sri Muktsar Sahib, Moga and Fazilka, Gurinder Singh Dhillon IPS for Patiala, Ludhiana, Barnala and Sangrur. He said that the voting process would be conducted on Electronic Voting Machines (EVMs) and seven thousand EVMs have been arranged for the purpose. He informed that the Commission has appointed 20510 employees for uninterrupted voting. However around 19 thousand police personnel have also been deputed to conduct free and fair elections.

Divulging more, the Spokesperson said that 9222 candidates are in fray for 2302 Wards. He said that the Commission has set up 4102 Polling Stations for these elections, Out of which 1708 stations announced as Sensitive and 861 as Hyper Sensitive.

The Spokesperson made it clear that every voter who entered in polling station before 4 pm, he/she will have the right to vote. State Election Commission has also announced February 14 and 17, 2021 as Dry Days. Counting of votes would be started at 9 am on February 17, 2021.