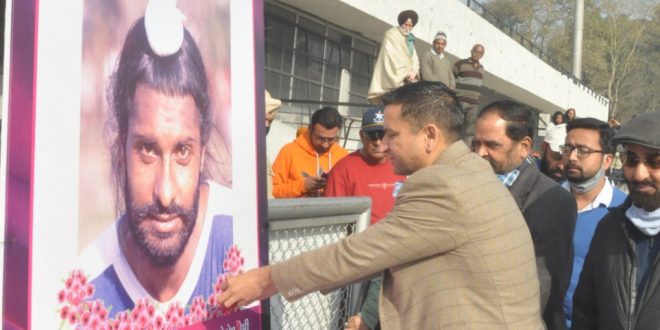 Jalandhar (Raftaar News Bureau) The Deputy Commissioner Ghanshyam Thori on Tuesday visited the Surjit Hockey Stadium where a coaching camp is being organized for last 125 days at Burlton Park.

Impressed from the massive participation of the young players for last four months, Deputy Commissioner who is also president of the Surjit Hockey Society lauded the role of society for holding coaching camps for last almost four decades.

He said that Surjit Hockey Society was playing a vanguard role for grooming the young players through such camps and told that this society has produced several players who have proved their mettle in national and international events.

Deputy Commissioner further said that society has been making every effort to channelize the unbounded energy of youth positively especially in the field of sports.

Thori said that society has laid the foundation of a great movement aimed at the revival of the national game by imparting world-class training to youth.

He said that Society Hockey Society has been organising international-level tournaments in memory of Olympian Surjit Singh and helping poor and needy parents to get their children married as well as providing scholarships to needy players.

The Deputy Commissioner also paid homage to Olympian Surjit Singh and announced a financial grant of Rs one lakh to the society.