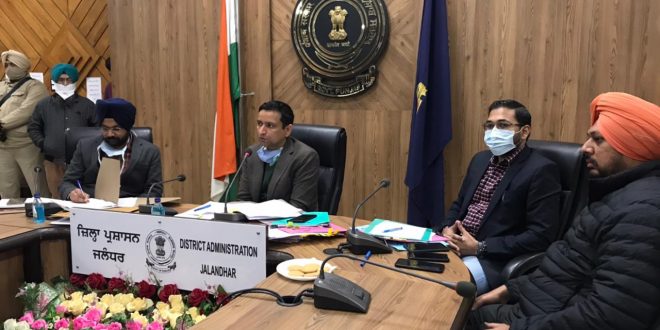 Jalandhar(Raftaar News Bureau) : As a part of its strategy to ensure maximum enrollment of specially-abled persons of Jalandhar under Unique Disability Identity Card (UDID) scheme, the district administration would hold ‘Form Collection’ camp in each of 11 blocks on February 1.

Presiding over a meeting at the district administrative complex, Deputy Commissioner Ghanshyam Thori said that in these camps on February 1, only forms would be collected by the officials and later, medical examination camps would be held separately in next days in each block.

He said in Nakodar, the first medical examination camp would be held on February 3 where a panel of specialist doctors would examine the specially-abled persons and later would issue disability certificates and UDID cards.

He directed the officials of Panchayat, Social Security Women and Child development and health departments to generate maximum awareness of these camps in the villages or urban areas through sarpanchs, Asha/Anganwari workers or councillors so that every specially-abled person can take maximum benefit of the camps.

The Deputy Commissioner said that specially-abled persons are an integral part of our society and reiterated his commitment to leave no stone unturned to provide them with all the necessary assistance.

He said that it was our duty to help the specially-abled persons have basic facilities equal employment opportunities to that of others.

He appealed to all specially-abled persons to bring their Aadhaar Card, Voter Card, or any proof of age, passport size photograph, and others for enrollment for UDID cards.

Divulging more, he said that a panel of experts like orthopedics, ENT and EYE specialists, psychiatrist, pediatrics, and others physically examine the applicants every Tuesday and Thursday before issuing a disability certificate in the Civil hospital.

He added that the card would also help in ensuring free travel to visually challenge government buses besides giving key benefits in employment and several opportunities.

It is pertinent to mention here that Jalandhar is already in the state with highest enrollment under UDID card scheme.