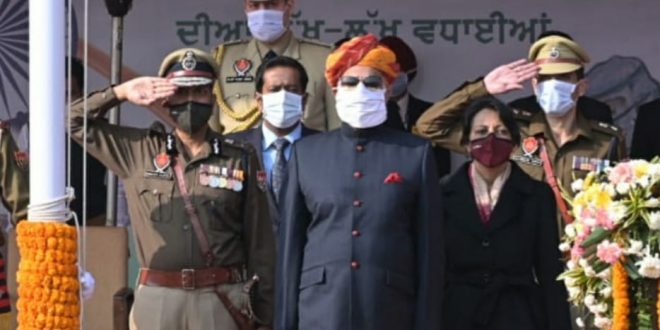 Extending greetings to all, he recollected the sacrifices of freedom fighters and soldiers who sacrificed their lives for the Nation and expressed gratitude towards framers of Indian Constitution. It is due to their vision that today we have emerged as the world’s largest democracy and republic, said he.

Hailing the contribution of Punjabis towards ‘Khushali & Hariyali’,the governor said that Punjab is known all over the world for prosperity and greenery and hoped that the people of Punjab will maintain this in a peaceful way in the times to come.

The farmers of Punjab have contributed a lot in the agriculture production and the development of State said he and added that, “I hope that ongoing problems of the farmers shall be resolved soon through talks;  I pay tribute to the farmers who have lost their lives and express condolences to their families.”

We are proud that the state of Punjab is considered to be a great symbol of Jai Jawan, Jai Kisan ;  The people of Punjab have always participated in the progress of India, said he.

He said that Punjab is a land sanctified by the feet of Gurus, Saints and Seers who have always inspired and guided us. We are all proud and happy that the 400th Aagman Purb of Shri Guru Tegh Bahadur Ji is being celebrated this year with the same reverence and enthusiasm as we celebrated the 550th Prakash Purb of Shri Guru Nanak Dev Ji last year.

Speaking about Covid19, the governor said, “India’s war against this global epidemic has reached a critical juncture.  The campaign for a healthy, COVID-free India has been strengthened by the approval of the vaccine made in the country, by the efforts of Prime Minister Shri Narendra Modi.  I congratulate all the scientists and innovators involved in this campaign.”

In the midst of Corona virus epidemic, we have been able to contribute significantly in the Global Economy. The call for Atam Nirbhar Bharat has been responded well; the mind and perception of the countrymen is completely moving towards Vocal for Local. Today, India has become a distinct identity around the world, said he.

Concluding the address with “Nanak Naam Chardi Kala, Tere Bhane Sarbat da Bhala ” , the Governor  hoped that we shall strive to strengthen Punjab and the country with a new thought, new idea, patriotism, and dedication.

Earlier, the Governor took salute from an impressive parade comprising the contingents of Punjab Police (PRTC Jahankhelan), U.T(Chandigarh) Police, Brass and Pipe Band of Punjab Police and NCC cadets, led by DSP Rupinderdeep Kaur Sohi. Impressive tableaux highlighting efforts afoot towards social issues were also showcased. Interestingly, the entire Republic Day parade had only a single female participant and that too in the most important role of the Parade Commander.