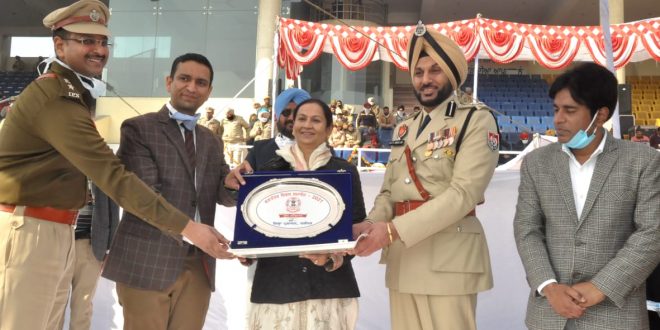 Announcing these gifts after unfurling national tricolour flag here during the district level function organised at Guru Gobind Singh Stadium, the Minister, accompanied by Deputy Commissioner Ghanshyam Thori and Commissioner of Police Mr Gurpreet Singh Bhullar announced 80’development projects for the district including water supply and sanitation project in 64 villages at cost of Rs 21.34 crore, construction of streets, playground, parks and stadiums in 14 villages at cost of Rs 1.09 crore and water supply and sanitation works in Partapura Market at cost of Rs 1.01 crore. Likewise, she also announced upgradation of Government Middle school Khusropur to Smart School.

The Minister also reminded the people of enormous contribution of Punjabis’s in the national freedom struggle. Citing that above 80% people who were either martyred, exiled or imprisoned for life term were Punjabis, she said our brave Punjabi soldiers have ever safeguarded the integrity of country from external aggression and internal disturbances besides the hard working and resilient Punjabi farmers made the country self reliant in food production despite having just 2.5% of country’s total area. Mrs. Chaudhary said that Punjab was the land of Gurus, Saints and Seers and we the Punjabis have inherited an indomitable spirit of self sacrifice from our great gurus Sri Guru Arjun Dev, Sri Guru Teg Bahadur and Sri Guru Gobind Singh Ji.

The Minister said that Punjabis are all the more proud for this sacred land from where the pivotal movements of freedom struggle like Kuka, Pagri Sambhal, Ghadar, Gurudwara Reform, Babbar Akali and others were spearheaded. She said that the state government was committed for the welfare of all sections of the society especially the poor and the disadvantaged ones.  Mrs. Chaudhary said that Mata Tripta Mahila Yojna policy approved by Punjab government is an effort to empower the Women-headed households in the State. Around 7,96,030 households are headed by women as per census 2011 and the objective of this new policy is to empower Women headed Households (WHH) in Punjab, who is an adult female and the sole or main income earner and decision-maker.

The Minister categorically said that the Punjab government led by Chief Minister was fully committed for safeguarding the interests of farmer community in state. She said that Punjab was the first state in country to repeal the three anti-farmers laws framed by Modi government. Mrs Chaudhary said that the Chief Minister is taking every possible initiative to protect the rights of the farmers and Punjabis.

On the occasion, the Minister honored renowned personalities in recognition to their outstanding performance in their respective fields.