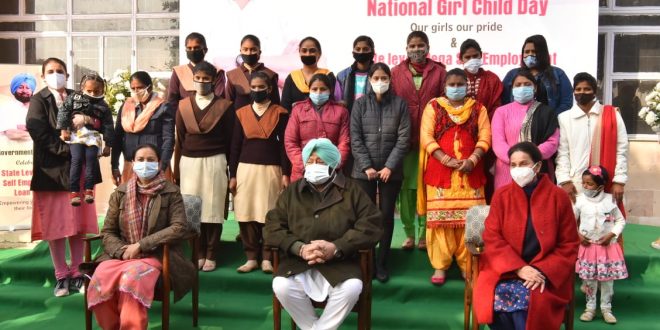 Patiala (Raftaar News Bureau) In a major initiative for the empowerment of women, Punjab Chief Minister Captain Amarinder Singh on Monday kick-started the National Girl Child Day celebrations with a clarion call to the society to come forward to protect the life and liberty of girls.

Underlining the need for creating grassroot-level awareness to further improve Punjab’s Girl Child Sex Ratio, which had gone up from 890/1000 in 2013-14 to 920/1000 during 2019-20, the Chief Minister said his government’s decision to dedicate the month of January as ‘Dheeyan Di Lohri’ was a step in this direction.

Noting that even the religious scriptures accord high status to women, Captain Amarinder said with girls consistently outshining boys at various levels, they continue to prove their mettle year after year. Women only need motivation to make a mark in every sphere, he said, pointing out that opportunities for girls were growing in today’s era. He cited the examples of Kamala Harris being elected the new Vice President of the US, an all women crew members of an aircraft and women fighter pilots as proof of the growing women power.

The Chief Minister also listed out various measures taken by his government to nurture women power, including 30% reservation for women in Government jobs, 50% reservation in Panchayat and Local Body elections, One Stop Centre Scheme in all Districts to support women and girls who are victims of violence or conflict, among others. He pointed out that the recently announced 50% concession in bus fare for women scheme would be launched shortly.

Further, Captain Amarinder cited the Mata Tripta Mahila Yojana, which has been launched with the aim to protect the rights and interests of women at every stage from birth till old age. It will empower 8 lakh Women Headed Households (WHH), he said. Another novel initiative in the form of Kasturba Gandhi MahilaYojana has been launched with a view to ensure 100% coverage of women under all existing schemes through sustained outreach activities, he added.

Social Security, Women and Child Development Aruna Chaudhary expressed gratitude to the Chief Minister for taking these various initiatives for women empowerment, in addition to the Poshan Abhiyan aimed at providing nutritional diet to women. As many as 27314 Anganwadi centres did commendable job in Covid-19 peak time as frontline warriors, she added.

Incidentally, though the  National Girl Child Day was on January 24, the state government is celebrating the occasion today.