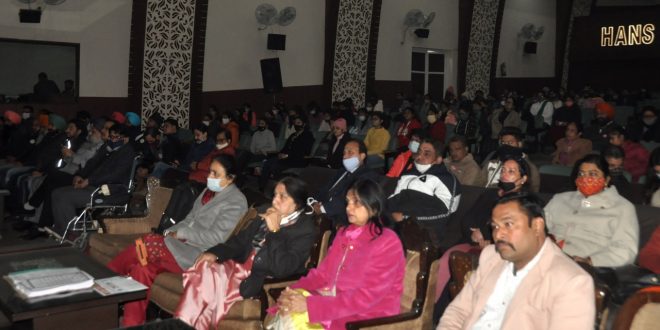 Thori said that thrust must be laid on sensitizing the people, especially the youngsters, about the need for exercising their franchise by rising above the parochial considerations of caste, colour, creed or sex. He categorically said that strengthening democracy at grass root level was a mammoth task and youth must contribute enormously in this national service.

The Deputy Commissioner said that fool proof voter lists were the very basis of democratic process and were in fact criteria for assessing the performance of a democratic nation.

He said that Election Commission of India (ECI) has successfully played the role of formulating and revising the electoral rolls time and again, without any obstacle due to which many advanced and developing nations were replicating India’s model of democracy.

The Deputy Commissioner said that celebration of national Voter’s day has its own significance as it has assured more and more participation of youth in democratic process.

Thori said that ECI was actually acting as a custodian of the democratic rights of every citizen of the country.

Meanwhile, Deputy Commissioner also launched e-Epic drive under which electors would be able to download electronic versions of the Electors Photo Identity Cards (e-EPICs). He said that the digital version of EPICs would be available for download from the Voter Helpline app, voterportal.eci.gov.in and nvsp.in

On the occasion, the Deputy Commissioner administered the pledge of ethical voting during the polls.

He also felicitated the officers for meritorious service in voter awareness besides the students who performed excellently in competitions held for creating awareness about voting rights.

Earlier, the Principal of the college Dr Ajay Sareen welcomed the Deputy Commissioner and other dignitaries to the college.