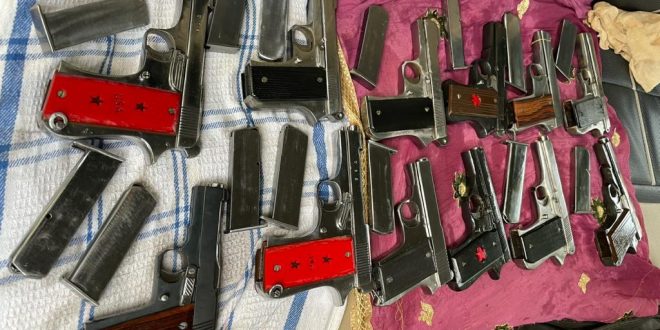 Chandigarh ( Raftaar News Bureau) : In a major inter-state operation, the Punjab police on Saturday busted a gang of Madhya Pradesh based weapons smugglers, who were supplying illegal arms and ammunition to gangsters in Punjab, and arrested two persons and seized a huge cache of arms, including 12 .32 bore country made pistols and 15 magazines, from their possession. The gang apparently also has links with certain Punjab based terrorists and is suspected of having supplied over two dozen .32 bore Pistols to gangsters and criminals in the state during the last 3 months alone.

According to Punjab DGP, Dinkar Gupta, the intelligence led operation was carried out under the supervision of Dhruv Dahiya, SSP, Amritsar (Rural), and the suspects, Mahesh Selotia and Jaggu were nabbed from their native villages in Khargone, MP, by a team led by DSP, Gurinder Nagra. Gupta said the raids in Khargone were conducted after investigations into the recent seizure of four illegal .32 bore country made pistols by Amritsar Rural police revealed the involvement of the MP based gang led by one Rahul.

The DGP said investigations conducted so far have revealed that this gang has been involved in smuggling several major weapons consignments for Punjab based gangsters. He said that this very gang was also the source of a weapons consignment of six .32 bore Pistols that were intercepted and seized by the Patiala Police in September 2020. Besides, the involvement of this gang had also figured in a case of seizure of illegal weapons at PS Chattiwind, Amritsar (Rural).

Gupta said that possibilities of this gang having links with Punjab terrorists cannot be ruled out as investigations indicate that the kingpin, Rahul, was in contact with several gangsters and hardliners lodged in Punjab’s jails and had been actively supplying them illegal weapons. Significantly, he was also in close contact with Akashdeep Singh- the prime accused in the drone module busted by the Punjab Police in 2019- who is presently in Amritsar Jail. Gupta further said that questioning of the arrested accused is still underway to unravel their complete network of contacts and their links smugglers, gangsters and terrorists in Punjab as well as in other states.

The DGP said besides Rahul, the name of another associate of his, Gopal Singh Sikligar of Satipura, r/o PS Bhagwanpura, Khargone, had been revealed during interrogation by the arrested suspects, Mahesh and Jaggu. He said names of both Rahul and Gopal had been included in case FIR no. 199 dated 10.12.2020 u/s 25 Arms Act, PS Gharinda, Amritsar (Rural) and efforts were on to nab them.