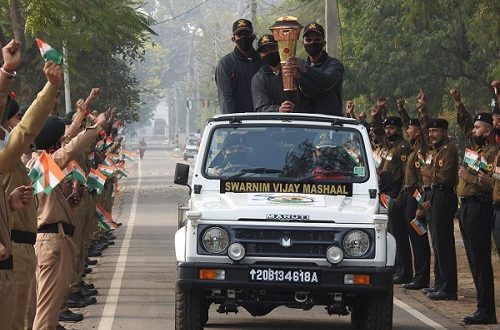 Nabha/Patiala (Raftaar News Bureau) :    As part of 50thAnniversary of victory of Indian Armed Forces in the Indo-Pak War of 1971, Nabha Military Station organised a host of events in the honour of the Victory Flame. The Indian Army is celebrating the ‘Swarnim Vijay Varsh’commemorating 50 years of the 1971 war triumph as a yearlong festival commencing from December 2020 to December 2021.A Mega event was organised by ‘AirawatDivision’ in Nabha Military Station wherein all the veterans in and around
Nabha& Sangrur were felicitated.

On 03 January 2021, a series of events were conducted at Nabha Military Station which included aGuard of Honour by a Ceremonial Guard, Band Display and felicitation of Veer Naris and Veterans by Commander of Pratham Brigade.Veterans narrated the war stories and experiences of great victory of 1971 war to the visitors. The event gave attendees a rare opportunity to know how the Indian Armed Forces had achieved the glorious victory in the great campaign of 1971 Bangladesh Liberation War.The Commander, PrathamBrigade also expressed gratitude towards the great deeds of our Veterans in the flawless victory.