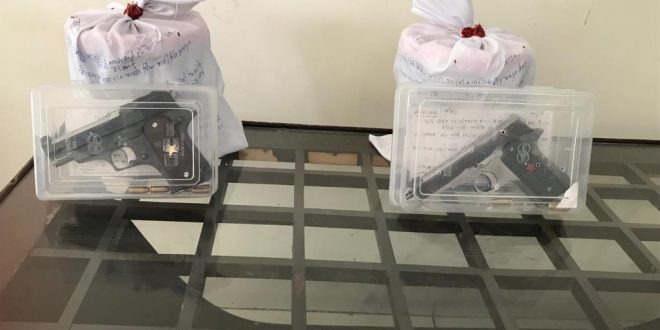 With the arrest of two persons and seizure of 4 kg of heroin, the Punjab Police has busted a major drug cartel with an international trail as well as links to gangsters and terrorists.

Initial investigations have exposed a powerful nexus of the accused, identified as Jaswinder Singh @ Jass and Ramesh Kumar @Kesa, both natives of the Jalandhar Rural district, with some gangsters lodged in Punjab jails, as well as a Dubai-based smuggler.

According to DGP Dinkar Gupta, the investigations so far suggest that the proceeds generated from the sale of the drugs, smuggled into Punjab from Kashmir, were probably being used to fund terror activities. Further investigations are in progress to unravel the full international conspiracy and network, complete with backward and forward linkages, he said.

Besides the heroin, two desi .32 bore pistols (with 10 live rounds) and a car having the registration number JK-012-E-2277 have also been recovered from the accused, who used bring drugs from Srinagar on instructions from imprisoned gangsters in Punjab. The drug cartel’s links have been traced to a Dubai based individual, who is allegedly involved in networking the drug smugglers in Kashmir for supply of drugs to drug smugglers and traffickers based in Punjab.

Giving details of the case, the DGP disclosed that the Jalandhar (Rural) Police had received inputs of Jaswinder Singh, Ramesh Kumar and Gursewak Singh operating a drug network, under instructions from one Palwinder Singh @ Pinda, who is currently lodged in Ferozepur jail.

Following the tip-off, the police conducted intelligence-led raids under the direct supervision of Sandeep Garg, SSP Jalandhar, leading to the arrest of Jaswinder Singh and Ramesh Kumar from the former’s house in village Lohian in District Jalandhar (Rural). Their accomplice, Gursewak Singh, r/o Patiala, is, however, absconding and a manhunt has been launched for him.

Interrogation of the arrested accused has revealed that their modus operandi was to bring the drugs, on behalf of Palwinder Singh, from Srinagar to Punjab in a J&K vehicle (in the present case, a car with the registration number JK-012-E-2277).  It appears that the drugs were smuggled into India from across the border, and then sold in the market, with the money going into financing the gangster as well as terrorist activities.