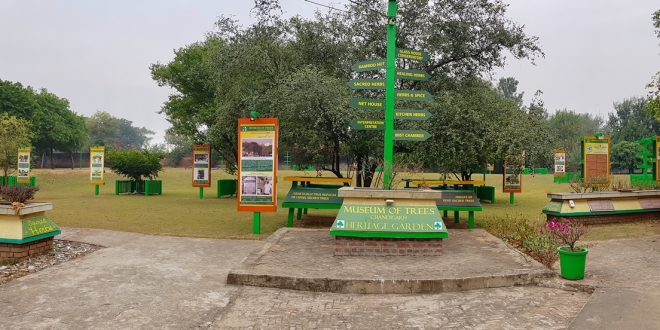 Chandigarh (Raftaar News Bureau) : The Governor Punjab and Administrator, Chandigarh, Mr VP Singh Badnore today inaugurated the Museum of Trees – a unique environmental project for conservation of sacred trees of Sikhism after which many Sikh Gurudwaras are named.

Extending Gurpurab greetings on the 551st birth anniversary of Guru Nanak Devji, the Governor said this was the most appropriate day and most appropriate manner of remembering Guru Nanak whose hymns are replete with references to nature, environment, trees, plants and animal life.

The Governor warned that climate change is an immediate crisis for humanity and to meet this challenge people will have to come forward with initiatives like the Museum of Trees to mobilize public opinion.

He complimented DS Jaspal for patiently working for ten years to clone 12 sacred trees and hoped work on the remaining trees will also be completed soon.

Former member of Parliament and Chairman, Minorities Commission of India thanked the Punjab Governor for supporting the cause of conservation of sacred trees of Sikhism.

He pointed out that Guru Nanak was the most widely travelled religious preacher of the world. The Guru interacted with common people in the open under the shadow of trees which is why most of the sacred trees are associated with Guru Nanak.

He praised the Government of India for supporting this project for conservation of sacred trees, since in many gurudwaras the sacred trees have been cut or have died due to improper care.

Creator and Curator of the Museum of Trees, DS Jaspal, thanked the Governor for supporting the project, which he said will be a source of attraction not only for Sikhs but for all nature lovers.

Jaspal pointed out that many of the sacred trees also have botanical significance. For example, the Beri tree of Gurudwara Ber Sahib in Sultanpur Lodi is unique because it has very few spines. Similarly, the leaves of the peepal tree in Gurudwara Pipli Sahib have a unique yellow pigmentation.

Jaspal also disclosed that the trees are protected by entirely in-house organic spray of garlic, chilies and heeng mixed with water, which is why the trees are healthy and bearing rich fruit.

The Museum of Trees has India’s most most modern Mist Chamber facility and a Glass House Conservatory, with sixteen air conditioners, to preserve and propagate rare and endangered species which grow at high elevations.