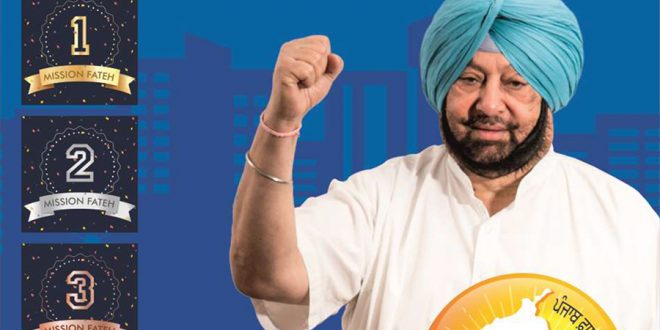 PUNJAB CM ANNOUNCES CONTINUATION OF ALL EXISTING RESTRICTIONS IN URBAN AREAS DURING UNLOCK 4.0

Chandigarh (Pitamber Sharma) :  Amid spiralling cases of Covid, Punjab Chief Minister Captain Amarinder Singh on Monday announced his government’s decision to continue with restrictions in urban areas, including weekend lockdown in all the 167 municipal towns of the state, along with 7 p.m.-5 a.m. curfew in all cities till the end of September.

The decision has been taken in due consultation with the Centre, as required by the Unlock 4.0 guidelines issued by the Ministry of Home Affairs, Government of India, according to an official spokesperson.

Section 144 of the CrPC banning all social, political, religious gatherings, protests and demonstrations will continue to remain in force throughout the State, while gatherings relating to marriage and funerals shall be allowed only for 30 persons and 20 persons respectively.

There will be total curfew on Saturdays and Sundays in the municipal states, while movement of individuals for all non-essential activities shall remain prohibited between 7:00 pm to 5:00 am within municipal limits of all the cities of Punjab throughout the week, as per the orders of the Chief Minister.

Movement of students and others in connection with all kinds of examinations, admission/entrance tests conducted by Universities, Boards, Public Service Commissions and other institutions has been excluded from the restrictions. Captain Amarinder has directed district authorities to facilitate the movement of such persons.

Religious places have also been allowed to stay open on all days upto 6.30 p.m., as have been restaurants (including those in malls) and liquor vends.  The restrictions on day/time do not apply to hotels.

Captain Amarinder has directed district authorities to strictly comply with these guidelines, said the spokesperson. He has asked the police to ensure strict action against the organisers and main participants in case of any violation of orders u/S 144 of Cr.P.C.

The spokesperson made it clear that essential activities and services, movement of persons and goods on National and State Highways, inter-state & intra state movement of persons and unloading of cargo and travel of persons to their destinations after disembarking from buses, trains and aeroplanes will be permitted during the restrictive conditions. These essential services include those related to health, agricultural and related activities, dairying and fishery  activities, banks, ATMs, stock markets, insurance companies, on-line teaching, public utilities, public transport, industry in multiple-shifts, construction industry, offices both private and government  etc.

The existing restriction on passengers in vehicles will also continue to remain in force, with only 3 persons including driver to be allowed in a 4-wheeler vehicle, and all buses and public transport vehicles to allow sitting for only half (50%) capacity with no person standing.

Further, Government and private offices shall operate with 50% staff strength till the end of the month i.e. not more than 50% of employees would be permitted on a particular day. The Heads of Offices would restrict public visitors in Government offices and encourage use of on-line Punjab grievance redressal system (PGRS) and other on-line tools so as to minimise person to person contact in offices, according to the directives issued on the Chief Minister’s orders.

The Chief Minister has, however, ordered relaxation with respect to opening of shops in the five worst affected cities of Amritsar, Jalandhar, Patiala, Mohali & Ludhiana. The condition of only 50% of the non-essential shops being open on a given day in these cities has now been removed.