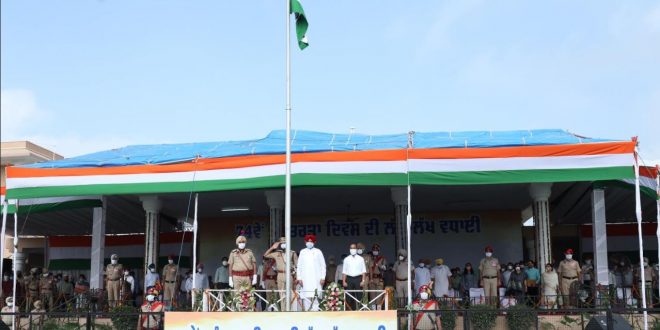 Patiala (Raftaar News Bureau) : Punjab Health and Family Welfare and Labour Minister, Mr. Balbir Singh Sidhu said that just as the Punjabis had won the war of independence, with the same courage and fortitude, the war waged by the Chief Minister Captain Amarinder Singh against Corona, would also be won under ‘Mission Fateh’.  “But in order to contribute to this war, we need to follow the social distance, wearing of masks and other health advisories,” he said.

Mr. Balbir Singh Sidhu was delivering his message here after hoisting the National Flag at Raja Bhalindra Singh Sports Complex, Polo Ground, Patiala during the district level function held on the occasion of 74th Independence Day of the country.  Due to the COVID epidemic, the event was celebrated by the district administration in a concise and simple manner.

Informing about the important steps taken by the state government against the COVID epidemic, Mr. Sidhu said that Punjab Government under the leadership of Chief Minister Capt. Amarinder Singh had made all necessary arrangements to deal with Corona by adding that there was no need to panic but the advisories issued by the government and health experts must be followed.

The Health Minister said that while the government was increasing the number of COVID tests to 20,000 per day, the Health and Family Welfare Department was recruiting around 4,000 of vacancies in the first phase and many more would also be started soon.

Appreciating Corona Warriors and Mission Fateh Warriors who rendered services in this testing time of COVID, the Health Minister appealed to the people to take precautionary measures against the epidemic as well as get conduct tests on being developing the symptoms of Corona.

Mr. Sidhu said that Chief Minister Capt. Amarinder Singh had assured all Punjabis by saying “saving the life of every Punjabi is the first duty of his government and your (people’s) government stands by you (People) in this difficult time.  Together we will “conquer the mission” against Corona.”

Mr.  Balbir Singh Sidhu said that at present we are going through the most difficult and challenging time of independent India when the Corona epidemic has gripped our state, country and the whole world.  But the cure rate of COVID patients in Punjab is 70 percent which is better than other states of the country. But we still have a lot to do in this fight, so cooperation of public is much needed.

The Health Minister said that although Corona has slowed down the pace of development in the world but we are proud that under the leadership of Chief Minister Capt. Amarinder Singh, Punjab has given importance to Agriculture, Power, Infrastructure, Urban Development, Rural Development, Education, Health, Industry, Civic Services by eradicating the VIP culture.

Elaborating on the austerity measures being taken by the government to eradicate drugs from the state, Mr. Sidhu said that it was a great achievement of the Punjab Government that 5.68 lakh drug addicts had been registered for treatment.

Referring to the achievements of the government, the Health Minister said that the Captain Government had made a concerted effort for the heirs of the martyrs while the long pending demand for compensation for the widows of the martyrs of 1962, 1965 and 1971 wars had also been approved.  He said that the Government has fulfilled its election promise by distributing smart phones to the students under Punjab Smart Connect scheme.

He said that besides providing more employment opportunities to the youth through under Ghar Ghar Rozgar scheme, the two-year extension in the tenure of government employees has also been abolished so that more and more young people could join the government service.