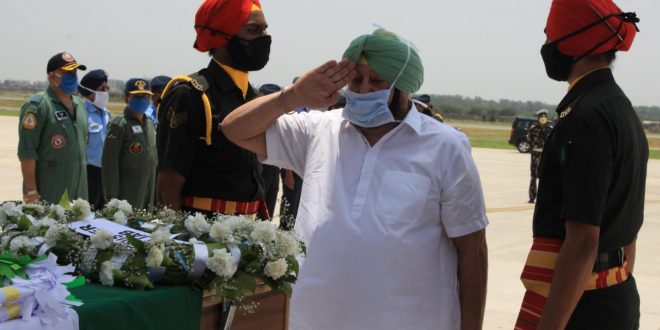 ·        IN RESPONSE TO SUKHBIR’S REMARK, SAYS HE HAS EVERY RIGHT TO GIVE OPINION AS A SOLDIER

Chandigarh (Pitamber Sharma) :   Advocating aggressive steps to take back the Galwan Valley territory seized by the Chinese, Punjab Chief Minister Captain Amarinder Singh on Friday urged the Government of India to issue an ultimatum to Beijing to vacate the occupied land immediately, with a clear warning that failure to do so would lead to serious consequences for them.

While India would also have to suffer some consequences of such an act, it could no longer afford to allow such intrusions and attacks on its territorial integrity to continue, said Captain Amarinder, talking informally to mediapersons at the Chandigarh air base where he had gone to pay tributes to the three sepoys whose mortal remains were flown in from Galwan Valley. Laying a wreath on the mortal remains of Sepoys Gurbinder Singh from Sangrur, Gurtej Singh from Mansa and Ankush from Hamirpur (HP), Captain Amarinder saluted their supreme sacrifice and said the nation was forever indebted to them.

Declaring himself to be totally against following an appeasement policy viz-a-viz China, Captain Amarinder said past experience showed that when faced with aggression, the Chinese had always backed off. It was time to call their bluff, he asserted, reiterating that every Indian wants a befitting response to be given to the Chinese.

The Chinese, with their Salami tactics, had been nibbling into Indian territory piece by piece since 1962, said the Chief Minister, demanding an end to these intrusions, which 60 years of diplomacy had failed to stop.

Questioning the so-called agreement which prevented the Indian troops from firing (even if they had the weapons), Captain Amarinder demanded to know who had come up with such an agreement. “How can one have an agreement of this nature with a hostile neighbour?” he asked.

In any case, it was clear that the attack on Indian soldiers was a premediated one by the Chinese, who had come prepared with their crude but deadly weapons, he said, adding that by  carrying the nail studded lathis and barbed-wire clubs and by attacking our troops they had abrogated whatever agreement was in place. In the circumstances, the Indian soldiers had full right to retaliated by using their own weapons, he remarked, adding that India alone could be responsible for adherence to the terms of the agreement.

Unrelenting in his demand to know why the soldiers posted in Galwan Valley failed to open fire, if they were indeed carrying weapons, after their Commanding Officer fell, Captain Amarinder said the Colonel’s death at the hands of the Chinese was an insult to the entire Indian Army. Asserting that he could not believe that the men at the LAC failed to open fire even after witnessing such a horrendous sight, he said the Indian Army is well trained and equipped with the best of weapons, which it has every right to use when faced with such a brutal and treacherous attack.

The Chief Minister recalled that during his term with the Army, armed soldiers were always strategically deployed whenever their senior officers went for meetings with the other side, and were ready to jump in for a rescue operation if needed. “Why were soldiers not so deployed in this case? And if they were, why did they not use their weapons to rescue the officers and men under attack?” he asked.

If the situation is allowed to escalate further, then China, in collusion with Pakistan, would get further emboldened to encroach into more Indian territories, which had to be stopped at all costs, said the Chief Minister.

Meanwhile, reacting to SAD chief Sukhbir Singh Badal’s tweet accusing him of playing politics on the Gangwal Valley issue, Captain Amarinder said as an ex-Army man, he had every right to express his opinion on the matter. With 20 soldiers dead, no soldier, in fact no Indian, could remain unaffected, he said.

Contrary to the misleading picture being projected by Sukhbir, he, like every Indian, stood with the Government of India at this critical hour, said the Chief Minister. But that does not take away from his right as a soldier to speak out and give his views on the situation, which continues to be a cause of concern for the nation, he added.