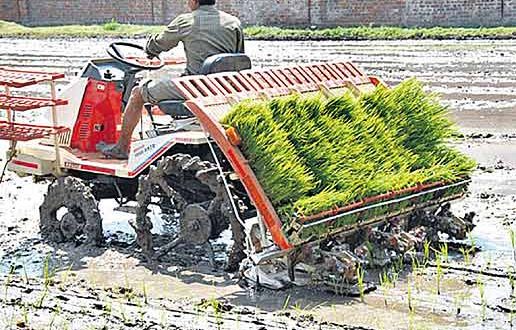 Chandigarh (Pitamber Sharma) : To cope up the problem of labour scarcity amid COVID-19, the Punjab farmers are now enthusiastically switching over to Direct Seeding of Rice (DSR) instead of traditional transplantation of paddy this year and nearly 25 percent of total area under paddy sowing is expected to come under this innovative technology which will help to slash  cultivation cost in terms of both labour and water.

To promote the technology of DSR and motivate the farmers to adopt it in a big way, the State Agriculture and Farmers Welfare Department sanctioned 4000 DSR machines and 800 paddy transplanting machines to farmers on subsidy ranging from 40% to 50%.

According to the Secretary Agriculture KS Pannu, Punjab had earlier fixed the target to bring around 5 lakh hectares under DSR technique during current year but given the labour shortage and keen interest shown by farmers to adopt the advance technology, 6-7 lakh hectares of area is expected to come under this technology , which is roughly 25% of paddy grown in Punjab.

He further stated that the DSR technique would be instrumental in saving about 30 percent of water besides cutting the cost of paddy cultivation by nearly Rs. 6000 per acre. Secretary further mentioned that as per reports and research of Punjab Agriculture University experts, the yield of paddy from DSR is at par with paddy crop grown   by conventional technique of transplanting.

Pannu further said that paddy transplantation is the only farm operation which is labour intensive and due to shortage of labour this year  caused by Covid-19 pandemic, the Agriculture Department had advised the farmers to sow the paddy crop by DSR as per the recommendations made by PAU recently. The departmental officials have been guiding the farmers in the feild  about the best ways to undertake new technology . He also appealed to the farmers that most critical element in new technology is the control of weeds and as such farmers must be careful that prior to undertaking  DSR  they  must procure  weedicide and spray the same within 24 hours of sowing the crop.

Notably, the farmers from across the state would cultivate paddy on area of 27 lakh hectares which include 7 lakh hectares under high quality Basmati variety of Rice.