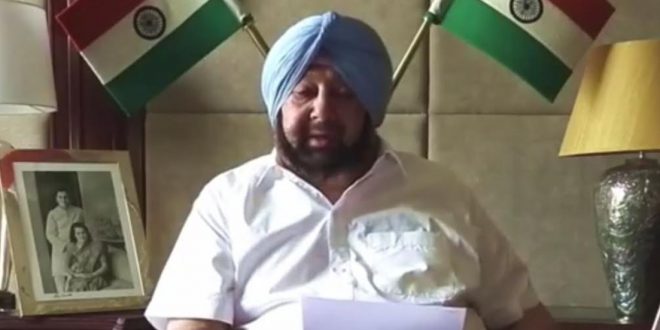 Chandigarh (Pitamber Sharma) : While asserting his government’s total preparedness to handle the Covid crisis, Punjab Chief Minister Captain Amarinder Singh on Sunday made an impassioned appeal to the people to strictly adhere to the safety protocols and restrictions to save themselves, their families and the state.

Though the state had adequate essential equipment to manage any further spread of the pandemic, which it had been largely able to control so far, the Chief Minister said he did not wish the stocks to be pulled out of storage for use as his entire focus was on saving lives.

Responding to questions during the latest FB Live edition of #AskCaptain, the Chief Minister said the Covid situation in Punjab had so far been manageable due to the strict lockdown imposed in the state and the cooperation of the people.  However, it had become essential now to ease some of the restrictions, but that did not mean that people could be allowed to violate the safety protocols, he said, terming as unfortunate the large number of violations being reported, forcing the police to take strict action.

Citing figures, Captain Amarinder disclosed that on Friday alone, 4600 challans had been imposed for failure to wear mask in public, 160 for spitting, and around two dozen for not adhering to social distancing norms. Such irresponsible behaviour could not be permitted as it could push Punjab on the same path as many other states in India, he warned,  pointing out that with 2.5% of the country’s population, the state was currently contributing a mere 0.5% of the Covid cases.

Terming the anti-Covid `Mission Fateh’ as the battle of the people of Punjab, the Chief Minister exhorted them to strictly follow medical advice to check the spread of Covid, and to consult their doctors immediately in case of any symptoms of cough, body ache, fever etc to rule out the pandemic infection.

Captain Amarinder thanked the various noted personalities who had lent their support to `Mission Fateh’, saying Punjab would always remember their contribution to its fight against Covid. Among the notable personalities are Amitabh Bachchan, Kareena Kapoor, Sonu Sood, Milkha Singh, Kapil Dev, Yuvraj Singh, besides others.

Elaborating on the state’s roadmap to handle the pandemic, the Chief Minister said with 2461 total positive cases, of which 2070 had recovered, Punjab’s situation had been under control so far. As of June 5, he said, 48 people had died of the infection. A total of 113000 samples had been tested, and only 438 persons had to be put in isolation, with just three persons having to be placed on Oxygen and another three on ventilator since the outbreak of the pandemic in the state.

Despite this, however, the state government was not taking any chances, said Captain Amarinder. In the first stage, 4248 beds in government hospitals had been set aside, with another 2014 now being added, while the private hospitals had allocated 950 beds for Covid patients, he disclosed. The total number of isolation centres identified to accommodate a large number of cases if the crisis aggravates stands at 52 government and 195 private, he added.

Of the 554 ventilators available, only one was in use, as of Saturday, said the Chief Minister, adding that in addition to the equipment already handed over to hospitals and other frontline workers, the Health Department had stocks of 488000 N95 masks, 64 lakh triple layer masks, 228000 PPE kits and 2223 oxygen cylinders.

Captain Amarinder, however, reiterated that he hoped that the need to use this equipment would never arise. Responding to a complaint of private hospitals charging exorbitantly for admitting Covid patients, the Chief Minister said he will ask the Medical Department to check, but urged people to go to government hospitals which were equipped with the best-in-class facilities and staff, and had shown an excellent record in terms of enabling recovery of Covid patients.

Referring to the Central Government’s so-called Agriculture reforms, the Chief Minister made it clear that his government will take tough measures to counter the move to obstruct the smooth agricultural marketing processes that had worked successfully for 60 years. He said he will write to the Prime Minister, who he said should understand the farmers’ problems, having himself been the chief minister of the agricultural state of Gujarat. Expressing concern over the Centre’s clear intent to do away with the MSP regime, Captain Amarinder further asserted that the Punjab government will fight any such move tooth and nail, and will not allow the interests of its farmers, who had given the nation its food security, to be compromised in any manner.

To a question regarding problems being faced in paddy sowing due to the shortage of migrant labour, the Chief Minister pointed out that less than 5 lakh of the total 13 lakh migrant labourers in Punjab had left the state. With over 8 lakh migrant workers still here, along with the state’s own local labour, there were no problems in the field or in the industrial units, he said. In any case, farmers, with the support of the PAU and the Agriculture Department, were going for direct sowing in large numbers, he said. Further, the Chief Minister said that a large number of the migrants who had gone to their native places were now wanting to return to Punjab and many of the industrial units and farmers were, in fact, making their own arrangements to bring them back.

In response to another question, Captain Amarinder said the state was already focused on promoting the food processing industry, and was now also looking at bringing in businesses that were shifting our from China in the wake of the Covid outbreak.  His government will give them all necessary permissions and also make available adequate land infrastructure for their establishment, he added.

Captain Amarinder assured a questioner that sugarcane arrears of cooperative sugar mills were being expeditiously cleared by the state government and the Cooperation Department. On the issue of private schools charging fees for the lockdown period, the Chief Minister said the state government will go in appeal against the High Court ruling on this count and expressed the hope that the court would understand the concern and pass a favourable ruling in the interest of the parents and the students.

He pointed out to a Punjab University student that the decision to cancel offline exams in the university did not lie with the state government as it was a subject that was in the UGC’s purview, which had announced that the final semester examinations would be held in July. However, for the other semesters, he said he will request the university and college authorities to take the students’ concerns into account and delay the exams.

The Chief Minister said, in response to a question, that with more industries coming in, employment generation in the private sector will continue to pick up pace and the various government departments will also fill up all vacancies regularly to address the problem of unemployment.

Captain Amarinder assured another citizen that his government will try to provide more relief to power consumers next year as the current situation had constrained PSPCL, which, despite the cash crunch, had announced domestic power tariff cuts for the poor and the small consumers. The move had benefitted nearly 68 lakh of the total 70 lakh domestic consumers, he added.

Clearly touched by the wish of a Patiala resident Manjeet, who said he had been Captain Amarinder’s agent in his first election in 1980, to have a cup of tea with him, the Chief Minister said he will personally arrange for the same soon. “Stay healthy, you are not going anywhere. We have to fight more elections together,” said Captain Amarinder, in response to Manjeet’s remark that he was not keeping well.

Accepting the suggestion of a citizen for dedicated cycle tracks, the Chief Minister said he will ask the Sports Department to identify suitable stretches. On some complaints of people not having smart cards/ration cards etc, he said the concerned DCs would immediately look into the same and resolve the problem. One resident of Ropar said he had neither a ration card nor food at his home, in response to which the Chief Minister directed the DC to get in touch with him and make urgent arrangements for food supply.

On a demand for opening of gyms, he said it was a central government decision under the National Disaster Management Act. Among other issues raised by questioners were delay in payment of salary, and opening of some outlets in some areas beyond the restricted 7 p.m., to which the Chief Minister promised to address the matters at the earliest.