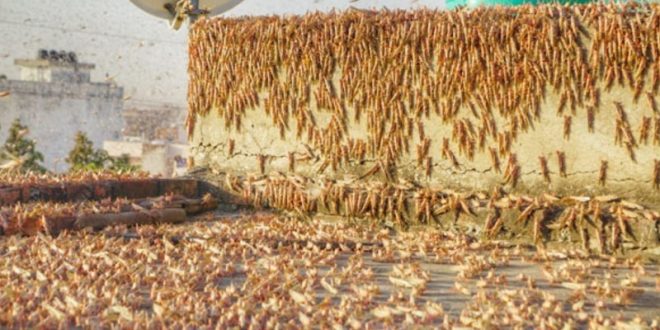 Jalandhar (Raftaar News Bureau) :- The Deputy Commissioner Mr Varinder Kumar Sharma on Friday directed the officials to remain alert for the Tiddi-dal and hold village level awareness camps to sensitize the farmers and panchayats at the grassroots level.

Presiding over a sensitization workshop of the officers from the various departments in District Administrative Complex, Mr Sharma said that Tiddi-Dal is one of harmful insect which can damage the crop heavily and there is need of the immediate action of spraying on the insecticide whenever noticed in the area.

He asked the Agriculture and Farmers’ Welfare Department to hold awareness camps in the villages under the supervision of Sub-Divisional Magistrates so that the awareness can be made at the grassroots level.

The Deputy Commissioner further asked the officials of various departments including Horticulture, Rural Development and Panchayat, Powercom, local bodies, fire brigade, health department and others to form a whatsapp group for constant sharing of the information.

Moreover, he also told the officials to use the public address system for the awareness in the villages besides; the farmers can be sensitized through Gurdwaras and others. He said that the awareness must be made in all villages so that farmers and panchayats’ heads can inform the district administration in case they saw the swarms.

The Deputy Commissioner said that the Punjab Government led by Chief Minister Capt Amarinder Singh has already made the arrangements of needed insecticides like chlorpyrifos and lambda for spraying on the locusts whenever noticed.

Chief Agriculture Officer Dr Surinder Singh told that this insect often flies in swarms and during favourable circumstances it can travel up to 80 to 200 km.

Dr Sanjiv Kataria, PAU apprised the officials about locust’ life cycle comprise of Eggs, nymphs and adult. He told that the egg laid by females in patches at the depth of 2 to 10 cm and about 60 to 80 eggs hatch in 14 days and wingless nymphs appears which cannot fly and can go up to 2 km in a day in favourable circumstances.

He also told that after 2-4 weeks, the wings appear and these can fly in the form of swarms and adult locust fly during daylight and take rest during evening and night. He added that the adult can fly up to 80 to 130 km per day and they feed on all the vegetation.

Dr Kataria said that the adult colour which is capable to swarm is pink and pink colour remains for 45 days and afterwards, colour changes to yellow and starts mating and start laying an egg and then the life cycles starts again.