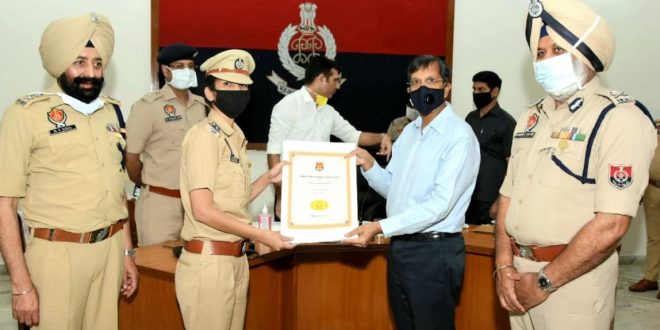 Patiala (Raftaar News Bureau) : The DGP, Punjab, Mr. Dinkar Gupta today appreciated the Patiala Police for exceptional services and awarded DGP Disks and Commendation Certificates to various officers and employees of the District Police. Addressing the police officers here at the police lines, the DGP said that the Punjab Police has acquitted itself exceedingly well during the crisis precipitated by the corona virus and has emerged as the role model worth emulating thus presenting a new face of the force before the people. This thoroughly professional conduct has earned the State Police, accolades in National and International fora for which he is very proud of the force.

Boosting the morale of the Patiala Police, the DGP said Punjab being a border state had to face terrorism menace but it faced the challenge head on and came out with flying colours. Similarly, during the corona crisis too, the State Police was always in the forefront like a true warrior.

On the occasion, IG Patiala Range Mr. Jatinder Singh Aulakh welcomed the DGP. The SSP Mr. Mandeep Singh Sidhu thanked the DGP for boosting the morale of the District Police. The DGP also visited the Dental Chair set up here and praising the eye testing as well as the critical care monitor batted for implementing the Patiala model throughout the State.

Making a mention of the incident in which the hands of SI Harjit Singh were severed, the DGP said that the police has to contend with the 85 percent good people in the society with tenderness but also deal with the bad elements within the ambit of law. He also added that the fact that everyone is showering praises on the Punjab Police, the credit goes to the par excellence performance of the all the police officers and other cadres.

Afterwards, the DGP honoured 4 SPs, 2 DSPs of the Patiala Police and 3 Inspectors, Sajila Khan Doctor of the police lines, 10 Sub Inspectors, 6 ASIs, 5 Head Constables, 6 Constables and an employee of the Market Committee with the DGP Disk and Commendation Certificates.