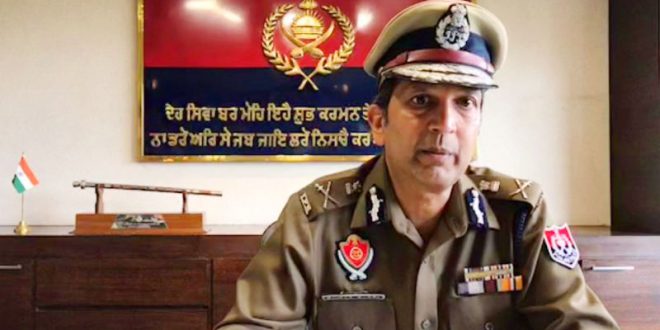 Gurpreet was reportedly in direct contact with several gangsters and drug smugglers currently in prison.

Giving details, the DGP said that Gurpreet Singh’s questioning had revealed that he was in direct contact with Shubham, a Batala based gangster and a prime accused in the case of armed robbery of nearly Rs. 7 crores from a jewellery shop in Amritsar in 2018. Batala was arrested in 2019 and is currently lodged in Central Jail, Amritsar. Based on the forensic and technical investigation conducted so far, it has been found that Gurpreet Singh was in contact with Shubham, and supplied weapons to his associates in Tarn Taran and Ferozepur areas.

The DGP further said that on the basis of investigation done by the team led by SSP Dhruv Dhaiya, three other associates of the gang, all resident of Ferozepur, had been identified. They were found to be actively involved in supply of weapons into Harike, Patti and Bhikiwind areas of Tarn Taran. He said Surya, r/o village Katora under police station Arifke, Ferozepur , had been identified as another key associate of Shubham, who was involved in the illegal weapons supply, in coordination with Gurpreet Singh.

Gupta further stated that Kuldip Singh, an accused in three cases of NDPS Act, including a case of 22 kg heroin registered in 2014 by SSOC, Amritsar, is currently lodged in Central Jail, Amritsar.

Links of Gurpreet Singh had also been traced to Sarabjit Singh @ Saaba s/o Sukhdev Singh r/o Lahore Chowk, PS City Patti, Tarn Taran, who is an accused in a case of 13 kg heroin and is also now lodged in Central Jail, Amritsar. Gurpreet Singh has repeatedly procured commercial scale heroin consignments from the above smugglers.

The DGP said that in-depth forensic and technical analysis of the mobile devices of Gurpreet Singh and his associates was being conducted. The links of the gang with gangster Shubham and major drug smugglers, including the accused of the 532 kg heroin haul from Attari border, was also being investigated further.

Reiterating the firm commitment of Punjab Police to eliminate the scourge of drug trafficking and smuggling from the state, Gupta said that since enforcement of curfew on March 22,

15.802 kg heroin had been recovered in the Tarn Taran district. Further, the district police had been rigorously pursuing cases of freezing and forfeiture of illegally acquired properties of major NDPS drug smugglers, under provisions of NDPS Act.

Gupta said the properties of 12 NDPS drug smugglers worth around Rs. 6.22 crores had been frozen by the district police since the imposition of curfew in the state. Besides, 11 new cases of freezing of property, worth around Rs. 17.42 crores, had been recently prepared and sent to the Competent Authority, Ministry of Finance, Government of India, while 7 new cases worth around Rs. 5 crores would be sent during this week.

Overall, illegally acquired properties of 51 major NDPS drug smugglers, worth around Rs. 54.46 crores, have been frozen by the district police in the past nine months, upon receipt of confirmation orders from the Competent Authority in New Delhi, said Gupta, adding that further cases are being actively identified and pursued expeditiously.