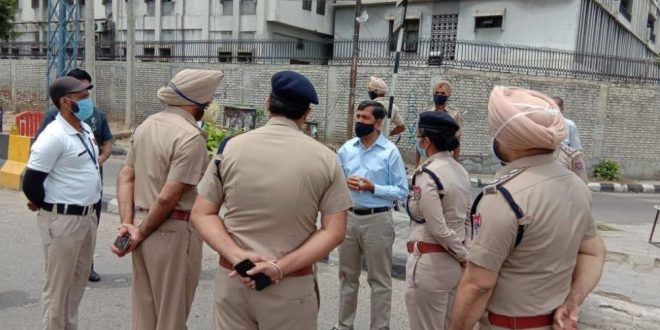 Ludhiana (Raftaar News Bureau) : Punjab DGP Dinkar Gupta on Sunday visited Ludhiana Commissionerate to take stock of the ground situation in the district and review the arrangements made by the police to tackle the COVID-19 pandemic.

The DGP also paid tributes to the first Punjab Police Corona martyr ACP Anil Kohli, a frontline Covid worker who died on April 18. He attended the Bhog ceremony of Kohli and expressed profound grief and solidarity with the bereaved family. He also handed over an appointment letter to Paras Kohli s/o Anil Kohli and a cheque for financial assistance to deceased officer’s wife, Palak Kohli. Due to ongoing Covid-19, restrictions, more than 20000 people and police officers from across the state  joined the Bhog Ceremony through live telecast on the internet. These included ADGPs, IG/DIGs and all SSPs of the state.

Earlier, chairing a meeting of senior police officers of Ludhiana Police at Police Lines, Gupta assessed the prevailing situation and the measures taken for strict enforcement of Covid guidelines. He directed the officers to intensify the enforcement of curfew and Covid guidelines. Commissioner of Police Rakesh Agrawal informed the DGP that district police had been strictly implementing the COVID restrictions and was dealing firmly with curfew violators. The district police had registered 426 FIRs for various curfew related offences and arrested 732 violators. A total of 14,806 persons had been taken to Open Jails, while 7088 traffic challans had been issued in the city against those going around in vehicles without any valid reasons, with 1265 vehicles being impounded.

The CP further informed the meeting that since Ludhiana is an industrial hub, which had lakhs of migrant labourers from across the country, the police had also accepted the tough challenge of serving them and other needy persons cooked food. As many as 57,85,793 persons had been served food and 39,837 food kits had been distributed among the needy during this period. Agrawal further revealed that 20, 000 migrants had returned to their home districts through Shramik Express Special Trains in last 5 days. He also pointed out that several factories had already restarted operations in Ludhiana, and a large number of labourers had joined work. Besides, 57 Shelter Homes had been set up and around 800 migrants were residing there, with free food and stay being provided by the administration.

In the maintenance of law and order in Ludhiana city, 2020 volunteers were helping police, and their role was being highly appreciated by the people, the meeting was informed. The general public is also rendering commendable services amid COVID-19, with 276 villages and 1077 mohallas being sealed voluntarily by the people. The Commissioner of Police further apprised the DGP that the police force on duty was being served cooked food twice a day, along with regular supply of potable water. To boost immunity of the workforce, Vitamin-B, Vitamin-C tablets, Vitamin-D, Zinc tablets, Giloy Ghanvati tablets, Homeopathic medicine Arsenic album 30 had been distributed. About one lac masks, 90,000 gloves, 50,000 bottles of sanitizers, 1700 face shields & Goggles and 564 PPE kits had also been provided to protect the frontline police personnel. As many as 12 Quarantine Centers with capacity of 478 Beds at different locations in the Commissionerate, Ludhiana, had been established exclusively for the police personnel.  Many Police jawans shared with the DGP that they had already taken HCQ as a prophylactic.

While appreciating the work done by Ludhiana Police, the DGP underlined the need to further intensify the efforts to ensure strict compliance of lockdown/curfew restrictions amid COVID-19. The DGP also interacted with the police officers across ranks, deployed at various chowks of Ludhiana. Noticing some violations of the ban on pillion riding on two-wheelers, Gupta directed the police personnel to strictly enforce the ban to ensure proper social distancing. He also asked the CP Ludhiana to run special campaigns on electronic as well as social media to educate the people about this.

The DGP also interacted with the volunteers deployed at Bharat Nagar Chowk and commended them for working with utmost sincerity & dedication for the nearly past two months without any remuneration. ACP Traffic Gurdev Singh, who is mobilising & coordinating the entire volunteer effort in Ludhiana, informed the DGP that more than 9000 volunteers were deployed with the Ludhiana Police and doing an excellent job in service towards society. The DGP also inspected a Mobile Medical Van with the doctor, which has been detailed to carry out medical screening of cops deployed at various points in the city. He also motivated the doctor on duty and the police officers to use the Pulse Oxymeter, especially for police personnel & their families, to check for any flu like symptoms.

To boost the morale of the police force and to recognise work done by frontline men and women, Gupta presented the ‘DGP’s Honour for Exemplary Seva to Society Certificates’ to 11 personnel, including an IPS officer ADCP (Headquarters) Deepak Pareek, who is the Nodal Officer for Covid-19 in Police Commissionerate, Ludhiana. SHO Focal Point Insp Mohd Jameel, Constable Sanjeev Kumar and Ajaib Singh were also honoured for their outstanding services in the battle against Coronavirus.