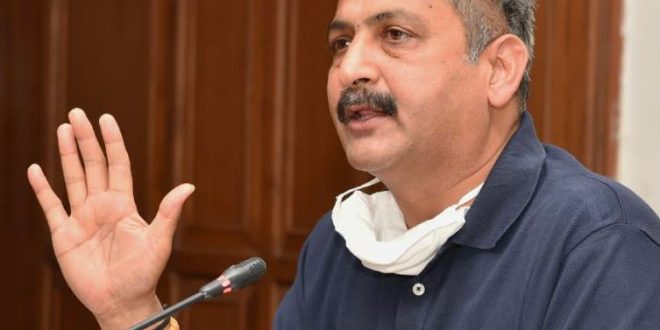 Chandigarh (Raftaar News Bureau) : As many as 1,05,898 school going students have shared their videos for Punjab Education Minister Mr. Vijay Inder Singla’s campaign, ‘Ambassadors of Hope’ which was launched for students of the state to share their creativity during lockdown. While divulging details, the cabinet minister told that the campaign created a world record as never in the past so many students participated in an online video competition concluded in eight days. He added that currently, Cebu City Commission (a govt body) of Phillipines holds the record of highest participation as they had got 43,157 participants in eight day long online competition.

Apart from entries, the campaign also engaged around 2.5 Crore people on Social Media platforms in eight days. The campaign got the highest, 8.5 Million (85 lakh) reach on Facebook followed by 7 Million (70 Lakh) on YouTube, 4.5 Million (45 Lakh) on Tik Tok, 2.5 Million (25 Lakh) on Instagram and around 1 Million (10 Lakh) each on Twitter & Snapchat.

The Education Minister said that the primary objective of engaging the students in a constructive activity in atmosphere of abject negativity has been achieved. He also said that entries from his relatives, will not be considered to be part of competition and winners will be selected strictly on the basis of merit.

The competition has even impressed union government who has appreciated the campaign. The union Human Resource Development Minister called Education Minister Vijay Inder Singla to seek the details of ‘Ambassadors Of Hope’ campaign.

Meanwhile six other states including Himachal Pradesh, Haryana, Uttar Pradesh, Odisha, Rajasthan, Chhattisgarh may also launch a similar campaign for their students. Ministers and Education Secretaries of these states already had discussions with Mr. Vijay Inder Singla enquiring details of the competition.

“It is heartening to see the response we have got from the children. For me every child is a winner as they have kept the Punjabi Virsa alive . Most of the entries are deep rooted in Punjabi ethos and culture. I am grateful to all the students who shared innovative ideas through videos on just one call,” Mr. Singla said while addressing media in Chandigarh.

“We appreciate the spirit of students and efforts put in by their parents, teachers and school principals in guiding and motivating them. Me and my team will go through every video and prepare a detailed report to announce results in next 20 days,” the cabinet minister said.

Singla also said that ‘Ambassadors of Hope’ will set a precedent to be followed by the governments to launch engagement driven campaigns for the children.

“Many of my relatives have also shared the videos of their kids. I assure you all they will not be considered while evaluating winners as we are committed to keep the merit and spirit of competition sacred,” education minister said adding that participation from girls is higher than boys with 60:40.

The minister informed that three winners each from all the 22 districts will be given attractive prizes that include Apple iPads, Laptops and Android Tablets for the students securing first, second and third positions, respectively.