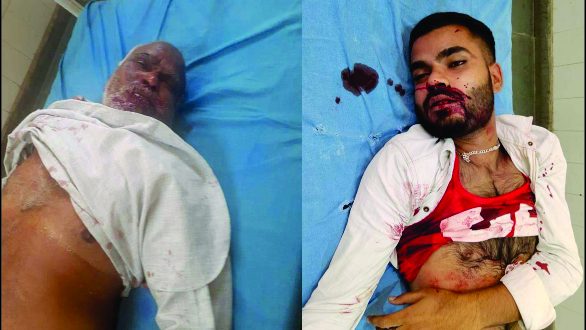 Samana / Patiala (Raftaar News Bureau) : Today at about 1:30 PM. One person named Tajinder Pal Singh @ Peter s/o Surinder Singh r/o Lalji di Kothi, city Samana, shot dead retired HC Brahmparkash aged 68 years and his son Sunny aged 20 years , with his licenced pistol 32 bore. who are resident of same locality and are neighbours they have old property dispute.
Today they got into verbal dispute near their house.  Peter is on run. Police parties are trying to track him. FIR is being registered After hot chase Peeter is just rounded up and arrested. CCTV record the live footage.

In a day light incident on Sunday armed assaulter struck in the Sub-divisional township of Samana in this Patiala district and gun down a father and son duo. According to the information reaching here this evening the armed attack was made in the Saraan Patti area in Samana when a retired Punjab police ASI Brahm Parkash was passing through Ram Mohalla along with his son 20 years old Sunny. As both were fired at by the assaulter Peeter from a close range and father son died on the spot. As Samana police was informed about this double murder and reached the spot police sent the dead bodies to the civil hospital Samana for postmortem and collected some evidences too. Police came to the spot and serch CCTV. One of Big evidence, all incident was caputered in the CCTV. It is big A case in this connection has also been registered. Meanwhile the police told that a further investigation in the case is on and it is reportedly the result of an property dispute. The accused Peeter has surenedered to Samana Police.

Thinking Of BREAKING THE LAW ??
The Only Walls You Will See Are Ones BEHIND THE BARS **Today in an very unfortunate incident happened in City Samana at about 1:30 PM.
One person named Tajinder Pal Singh @ Peter s/o Surinder Singh r/o Lalji di Kothi, City Samana, shot dead retired HC Brahmparkash aged 68 years and his son Sunny aged 20 years with Revolver. They were residents of same locality and are neighbours they have some old property dispute.

After committing murder Peter Fled the scene of crime in his Swanky XUV Car and was caught after a Hot chase successfully.
PETER THOUGH HE WILL ESCAPE BUT
KANOON KE HAATH BAHUT LAMBE HOTE HAI

We The Patiala Police are the FRONTLINE CORONA WARRIORS, helping People in distress and in need But for People like PETER, who are on the wrong side of the law, We are the same STEEL FRAME & ENFORCERS of LAW,

Our Message to all those who take law in their own hands,

WE PROMISE : If you are on the wrong side of the law,
WE WILL FIND YOU, DIG YOU OUT OF HOLES, WE WILL BRING YOU TO JUSTICE. LAW OF LAND WILL PREVAIL.