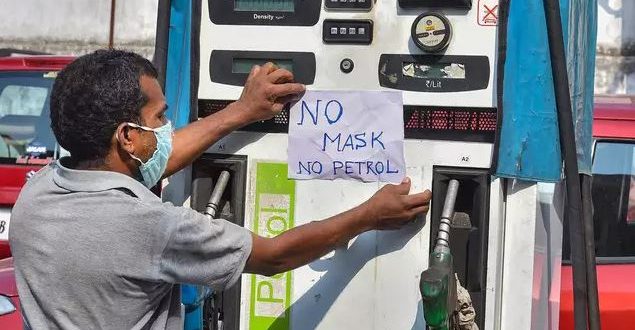 Chandigarh, April 30 (Raftaar News Bureau) : Ramping up efforts to control Corona Virus Pandemic, the Punjab Government issued advisory for petrol pump managers and operators to maintain hygiene and sanitisation at filling stations. Disclosing this here today, an Official Spokesperson said that the government advised to Petrol Pump Managers/Operators to deploy only essential staff at a particular time and planning the shifts with an objective to avoid clustering of staff. The Advisory further stated that a worker suffering from high fever/cough/sneezing/difficulty in breathing should voluntarily report the same to the petrol pump manager as well as seek immediate medical advice. The workers shall be advised not to indulge in any handshakes or hugs to greet/see-off each other. Petrol Pump owners are advised to install foot-operated hand-washing stations for staff/workers and visiting customers. However, the social distancing norm of maintaining a distance of at least 1 meter shall be followed while washing hands by drawing marking circles in front of such hand-washing stations.

Spokesperson further added that Alcohol-based sanitizer (minimum 70% ethyl alcohol) should be mounted at the Petrol pumps for staff/workers. Use a minimum of 3ml of the sanitizer (approximately 2 pushes of sanitizer dispenser) on DRY HANDS for at least 30 seconds. The owner/staff/workers should be advised to wear cloth mask at all times immediately from leaving the house till the entry back into the house. “The staff/worker should be advised to mandatorily hand wash/sanitise in the manner prescribed before touching the refreshments during tea-break/lunch-break etc. They should also be advised not to roam without purpose at petrol pumps and to avoid touching the surfaces, equipments etc. The worker should not smoke or chew tobacco-based products such as gutka, pan masala etc. In case of cough/sneeze, the staff/worker should use the handkerchief,” he said.

The Advisory further added that in case a worker is not carrying the handkerchief he/she should cough/sneeze into the flexed/bent elbow. The petrol pump owners/managers may encourage the staff/workers to download “COVA APP” for correct, timely and authentic information. The State Government also laid the guidelines about disinfection of petrol pumps, in which Indoor areas should be cleaned every evening after office hours or early in the morning before the rooms are occupied. Outdoor Areas have less risk then indoor areas but they also required to be meticulously cleaned as per the procedures. Sanitary workers must use separate set of cleaning equipment for toilets (mops, nylon scrubber) and separate set for sink and commode. They should always wear disposable protective gloves while cleaning a toilet.

The petrol pump managers have been advised to have the facility for sanitising the hands for vehicle drivers at the entry points. Alternatively, a facility for disinfecting the vehicles, even on payment basis, may be considered. In case where the petrol/diesel tank is opened through key, the handling worker should wash or sanitise his hands immediately after handling the key. The Petrol pumps should promote the digital transactions to the possible extent and workers should immediately sanitize their hands before and after any cash transaction. “If anyone facing any difficulty then he should report to the Helpline No. 104/State Control Room No. 01722920074/08872090029, so as to assist the medical facility to undertake further necessary actions”. Spokesperson added. In case a worker is diagnosed as corona positive, the employer shall immediately inform on helpline No. 104/State Control Room No. 01722920074/+91-8872090029.